The Curious Recovery of a ‘Threatened’ Bat Species 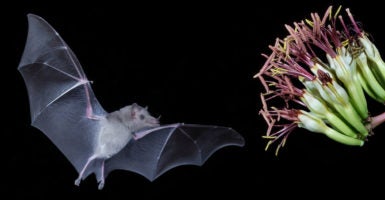 If it were true, it would be good news.

Unfortunately, the U.S. Fish and Wildlife Service’s claim that the lesser long-nosed bat has “recovered” so well that it can be removed from the endangered-species list is definitely not worth the paper on which the proposed rule delisting it is printed. (At about $480 a page for 11 and a half pages, that’s about $5,500 just to print the fib.)

Worse still,  Fish and Wildlife may be seeking to eliminate potentially thorny legal problems that come with a federally regulated species by making threats to the bat along the U.S.-Mexico border just bureaucratically vanish.

When the Fish and Wildlife Service proclaimed the bat “threatened,” it asserted there were only about 500 of the species and that it had only 14 known roosts—places like caves or old mine entrances, where the bats congregate when not fluttering about. (Apparently, not all bats are opposed to mining.)

Back in 1988, Fish and Wildlife contended that these low numbers, in combination with threats from livestock grazing and fires, were pushing the species toward extinction.

Even Fish and Wildlife acknowledges that its original claim about the bat’s “threatened” status has been a subject of “debate as to [its] legitimacy… .” Now, it says there are 100,000 of these bats in the U.S. and even more in Mexico. There are not 14 roosts in the U.S., but reportedly 75.

This would be a big deal if these big numbers reflected successful efforts to improve the bat’s abundance or distribution, but they don’t. Fish and Wildlife states that the new numbers “in large part, reflect a better approach to survey and monitoring in subsequent years.” For those who do not speak bureaucratese, that means they were way off in the first place.

Further, Fish and Wildlife assumed cattle and fire to be serious threats by consuming the flowering plants that produce the nectar that these bats—which don’t eat insects—consume. Turns out, they were found not to be as problematic as the agency thought.

Essentially, everything forming the rationale for adding the bat to the endangered-species list was wrong.

The law anticipates that there might be such mistakes and provides a mechanism so the agency can make a correction if the data used to justify listing a species was wrong. For Fish and Wildlife, however, calling the bats a “recovery” sounds a lot better than admitting the error, and that is something the agency has a habit of doing (see here and here).

The Bat and the Border

Falsely claiming the mistake as a victory, however, is not the only thing troubling about Fish and Wildlife’s proposal to take the bat off the federal rolls.

The agency uses the word “border” only four times in its proposed rule and only two of those are in the context of threats to the bat. In other documents, the word “border” is sprinkled throughout like jimmies on ice cream.

In the species status review, the word “border” occurs about 60 times, with entire sections dedicated to the threat posed by border activities. The five-year review is similar.

The environmental movement has long claimed border security causes adverse impacts to endangered species, but this case is different.

The issue with the bat is not that a new wall or a fence would inhibit wildlife migration, that lights would disrupt nocturnal animals, or that any other particular border-security measure would somehow pose a threat to endangered species.

These documents reveal that illegal border crossings likely present the single-biggest threat to the species.

The Real Threat to the Bat

While Fish and Wildlife does not mention this in its proposed rule, according to underlying documents, “[o]ne of the most significant threats to known lesser long-nosed bat roost sites are impacts resulting from use and occupancy of these roost sites by individuals involved in illegal border crossings, both from individuals crossing to look for work and the trafficking of illegal substances.”

“The types of impacts that result from illegal border activities include disturbance from human occupancy, lighting fires, direct mortality, accumulation of trash and other harmful materials, alteration of temperature and humidity, destruction of the roost itself, and the inability to carry out conservation and research activities.” Fish and Wildlife states that “[t]he colonial roosting behavior of this species, where high percentages of the population can congregate at a limited number of roost sites, increases the likelihood of significant declines or extinction due to impacts at roost sites.”

The agency spends pages detailing causes of roost-site disturbance that it describes as “the primary threat to this species,” and the vast majority is dedicated to the threat from illegal border crossings. All of the lesser long-nosed bat’s U.S. roosting sites are reasonably close to the border. (And, it’s worth noting that some of these roosts may be shared with yet another federally endangered bat, the Mexican long-nosed bat.)

While the bat population and roost sites were drastically undercounted when the species was listed, one of the few numbers that seems to have withstood the test of time is the number of maternal colonies in Arizona: three in 1988 and three as of 2016. (Inconsistently with the report’s narrative, the agency’s map appears to show more.)

The bigger the congregation, the more important it is to the species’ conservation, and the maternal colonies are by definition more vulnerable, as they are far fewer in number.

Information collected for a statutorily required five-year review of the species’ status reported threats to roosts along the U.S. southern border.

The assistant refuge manager at Cabeza Prieta National Wildlife Refuge warned about the impacts on roosts at the refuge and at Organ Pipe Cactus National Monument, both in Arizona. He said, “[t]here is evidence of illegal smuggling activities less than one-tenth of a mile from the mine adit [opening].

“We continue to be concerned that the fence will be damaged and the adit will be utilized by smugglers, possibly forcing the bats to once again abandon the adit.”

Fish and Wildlife reports that smugglers subsequently damaged the fence and that the roost site at the refuge was abandoned. While the warning dated to 2005, the agency states that recent data is still worrisome, as apprehensions of illegal border-crossers reported on the refuge rose 56 percent from 2015 to 2016.

Additional warnings regarded a bat roost at Organ Pipe Cactus National Monument. The same Fish and Wildlife official reported numerous smuggling trails in close proximity to the mine entrance used by lesser long-nosed bats on the monument and that “given the paucity of maternity colonies in the United States, any loss is significant.”

According to Fish and Wildlife, illegal border activities have, at least for a period of years, caused bats to abandon some sites, gates put up to protect others have been vandalized, and a mesh-screen covering at another roost site was easily defeated. Yet, even if the gates could somehow be secured, the species status review indicates that both installing and removing gates “had caused bats to abandon the sites” on Fort Huachuca in Arizona for years.

Further, the agency states that “current information leads us to believe that bat gates are not accepted as well by lesser long-nosed bats … .”

The proposed rule to proclaim the bat recovered is more oblique.

These statements indicate that Fish and Wildlife is hopeful the primary threat to the species may be addressed at some point in the future. Given the agency’s past behavior, such as keeping a plant on the endangered list a decade after discovering millions of them, this is a strangely easy-going attitude.

It seems like an endangered species can be used to shut down just about anything—except, perhaps, illegal activity along the border.

Perhaps the Supreme Court dictum that endangered species must be conserved “whatever the cost” somehow does not apply there.