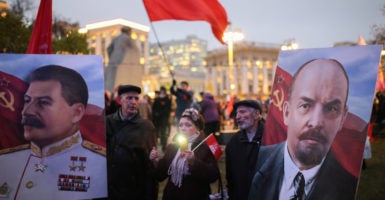 People hold portraits of Soviet dictator Josef Stalin and Russian revolutionary Vladimir Lenin as the Russian Communist Party rallies to mark the 100th anniversary of the 1917 Bolshevik Revolution. The same day in the United States, the White House commemorated the millions of victims of communism. (Photo:Sergei Bobylev/TASS/Newscom)

The White House issued a statement Tuesday commemorating the National Day for the Victims of Communism, on the 100th anniversary of the Bolshevik Revolution that led to decades of a murderous totalitarian regime in the Soviet Union.

The statement came the same day that President Donald Trump visited South Korea, which is facing a nuclear threat from its communist neighbor North Korea.

The statement says “oppressive communism” is “incompatible with liberty, prosperity, and the dignity of human life.” The statement continues:

Over the past century, communist totalitarian regimes around the world have killed more than 100 million people and subjected countless more to exploitation, violence, and untold devastation. These movements, under the false pretense of liberation, systematically robbed innocent people of their God-given rights of free worship, freedom of association, and countless other rights we hold sacrosanct. Citizens yearning for freedom were subjugated by the state through the use of coercion, violence, and fear. … Today, we remember those who have died and all who continue to suffer under communism.

Recognizing the current victims of communism was an important step, said Marion Smith, executive director of the Victims of Communism Memorial Foundation.

“What’s particularly important about the [White House] statement is that it mentions all who die and continue to suffer under communism,” Smith told The Daily Signal.

>>> Podcast: Half of Millennials Would Prefer to Live in Socialist or Communist Country

“Typically the last few presidents have shied away from acknowledging North Korea, China, Cuba, Laos, and Vietnam are communist,” Smith continued. “That’s something we haven’t really heard since President [Ronald] Reagan in connecting the ideas of communism with the consequences.”

Smith noted that President George W. Bush was the last president to recognize the victims of communism, as he was the honorary chairman of the memorial in 2007.

Communism once consumed much of Europe, but now only exists in five countries. That’s largely because the system was such a failure, said Lee Edwards, a distinguished fellow at The Heritage Foundation.

“It’s important to have an acknowledgement from the White House the Bolshevik Revolution was the god that failed,” Edwards told The Daily Signal.

“Communism promised peace, land, and freedom and failed to deliver. Instead of peace, there were decades of communist wars. It took land from people and put them in communes, which resulted in famines.”