As Communism Turns 100, a Brief Look at the Death and Destruction It Has Wrought 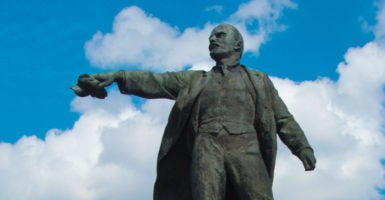 President Franklin D. Roosevelt called Dec. 7, 1941, “a day that will live in infamy,” and with good reason.

The date that Tojo’s Japan launched a surprise attack on the U.S. naval base at Pearl Harbor heralded America’s entrance into the bloody fighting of World War II.

But there are other dates that live in infamy, and many of them aren’t nearly as well known. But they deserve to be. Take Nov. 7, 1917.

Anything come to mind? One hundred years ago this month, Bolsheviks under the leadership of Vladimir Lenin overthrew the Russian government and established a communist dictatorship. “The world has never been the same since,” writes foreign policy expert Kim Holmes in a recent article for the Richmond Times-Dispatch.

How many perished in the wake of this “revolution”? It depends on which historian you ask. According to Richard Pipes, it was 9 million. Robert Conquest says at least 20 million, and likely as many as 30 million, died in the “Great Terror.”

If you include “unnatural deaths,” the number who died could be as high as 50 million. For perspective, consider that more than 60 million died in World War II—roughly 3 percent of the world’s population at the time.

In short, when looked at in terms of human carnage—of lives lost—the Russian Revolution was essentially another world war. So why isn’t Nov. 7, 1917, as notorious as Dec. 7, 1941?

This discrepancy becomes even more blatant when one considers the wider cost of communism. The Russian experience, after all, inspired other “revolutions,” and its record of mass genocide “is exceeded only by another communist dictatorship, Maoist China, which destroyed between 44.5 to 72 million lives (according to Stephane Courtois). And let’s not forget the ‘killing fields’ of Cambodia in the 1970s.”

Why isn’t this history better known?

“[Soviet leader Josef] Stalin kept most media out, so few Americans knew that millions were starving,” writes John Stossel in a recent column. And he had help. “Even as the Russian regime killed millions, some journalists and intellectuals covered up the crimes.”

But it isn’t just the loss of life that stains the history of communism. Its legacy is also one of grinding poverty.

Most of the 88 countries that score “repressed” or “mostly unfree” on The Heritage Foundation’s Index of Economic Freedom are either communist, former communist, or some type of socialist economy. They are also the world’s poorest nations.

And that, even more than the appalling body count, is what ultimately doomed Soviet communism: the awful material conditions.

Life expectancy of Russians in the 1980s was six years lower than in Western Europe, according to economist Nicholas Eberstadt. Infant mortality was three times higher. Death rates were rising for every age group.

“Russians looked westward and were appalled by their own poverty,” Holmes writes. “Whatever the West had—freedom and wealth—that was what the Russians wanted.”

So when President Ronald Reagan stood at the Brandenburg Gate in 1987 and urged Mikhail Gorbachev to “tear down this wall,” he was giving voice to a frustration that had long been pent up inside the people who lived behind the Iron Curtain.

The wall finally came down, undone in large measure by the manifold failures of communism itself.

Of course, Russians even today must deal with the continuing fallout of the 1917 revolution. “Every day they face the corruption and poverty caused not only by authoritarian rule, but by the social habits and structural problems created by communism,” Holmes writes. You can still see the devastation it wrought, echoing across the country.

And you can see how vital it is that we keep freedom alive here in what President Abraham Lincoln so aptly called “the last best hope of earth.”