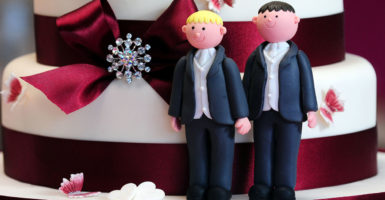 Sixty-eight percent of Americans don't agree with the left that a baker should be forced to "provide a special-order wedding cake for a same-sex wedding if doing so violates their religious convictions." (Photo: Rui Vieira/ZUMA Press/Newscom)

With so much political tension across the country, it would probably help to sit down and have an open conversation. There’s just one problem. According to 71 percent of America, political correctness is silencing the discussions we need to have.

That’s just one of the fascinating nuggets from Cato Institute’s 2017 Free Speech and Tolerance Survey, which points out the incredible differences between Republicans and Democrats on a host of issues. Issues, ironically, that more and more conservatives don’t feel comfortable talking about.

Unlike Democrats, who don’t feel the need to “self-censor,” the report explains, “strong majorities of Republicans (73 percent) and independents (58 percent) say they keep some political beliefs to themselves.” That’s no surprise—most conservatives probably think they’ll be punished for them.

Just ask America’s Christians. Dozens of them have been hauled before human rights commissions, boards of directors, and school administrators for voicing their values or worse—gasp!—living by them.

Even in this survey, 32 percent [of] Democrats told these same pollsters that business executives who believe homosexuality is a sin should be fired. Not “say” it’s a sin or bring the topic up in an office setting. A third of Democrats actually think Americans should lose their jobs just for believing what the Bible says about sexuality.

What happened to tolerance, the supposed calling card of the liberal movement? Apparently, it went the way of Mozilla’s Brendan Eich. Like Craig James, Angela McCaskill, the Benham Brothers, Chaplain Wes Modder, and too many others, Eich was the living proof that believing in something as fundamental as natural marriage can cost you your job. Despite never bringing up the subject at work, he was sacked for exercising his rights as a public citizen on the state’s marriage amendment.

Andrew Sullivan (who no one would mistake for a social conservative) had strong words for his gay activist friends at the time. “The whole episode disgusts me—as it should disgust anyone interested in a tolerant and diverse society. If this is the gay rights movement today—hounding our opponents with a fanaticism more like the religious right than anyone else—then count me out.”

Hopefully, stories like Eich’s are leading to the groundswell of support for people like baker Jack Phillips, whose decision not to make a same-sex wedding cake landed him before the U.S. Supreme Court. The numbers backing Phillips (and others like him) are climbing, Cato shows.

Most Americans want to be “counted out” of the left’s conform-or-be-punished crusade, too, refusing to believe that Phillips, Aaron and Melissa Klein, or Barronelle Stutzman should have to surrender their views as “the price of doing business.” Each one showed the ultimate professionalism and courtesy to the same-sex couples in their shops—offering to sell them anything but a customized wedding bouquet or cake.

In the end, it wasn’t their services the couples were after—but their surrender. Sued, vandalized, and harassed, they’ve fought just to keep their lives afloat. The Kleins lost their business and are still in court fighting a $138,000 fine; Stutzman could lose her home and all of her personal assets; and Phillips (who saw a 40 percent drop in income), at one point, was threatened with jail time. All because they didn’t want to be forced to participate in a ceremony that violates their faith.

Fortunately, a majority of Americans are sympathetic. In polling even higher than June’s Rasmussen Report, 68 percent of Americans don’t agree with the left that a baker should be forced to “provide a special-order wedding cake for a same-sex wedding if doing so violates their religious convictions.”

Even more encouraging, most don’t think those wedding businesses should be punished for refusing service to same-sex weddings. “Two-thirds (66 percent) say nothing should happen to a bakery that refuses to bake a cake for a same-sex wedding. A fifth (20 percent) would boycott the bakery, another 22 percent think government should sanction the bakery in some way, such as fining the bakery (12 percent), requiring an apology (10 percent), issuing a warning (8 percent), taking away its business license (6 percent), or sending the baker to jail (1 percent).”

In December, the only opinion that will matter, however, is the U.S. Supreme Court’s. That’s when the justices will hear Phillip’s case and decide—not just his fate, but the fate of every American to live and work according to their beliefs. Let’s hope their reasoning is in line with most of the country’s, who thinks everyone deserves tolerance.