America’s Teenagers Are Losing Their Religion 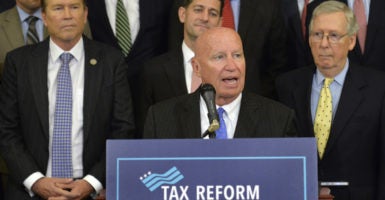 "Here’s the challenge: you can't lower rates, you can’t become more competitive if we keep everything just as it is,” said Rep. Kevin Brady, R-Texas. (Photo: Mike Theiler/UPI/Newscom)

The chairman of the House Ways and Means Committee says Republican’s tax plan unveiled Thursday could potentially include a repeal of the individual health care mandate in Obamacare.

“The president feels very strongly about including this at some step before the final process and he’s told me that twice by phone and once in person,” Rep. Kevin Brady, R-Texas, said Friday in an interview with Politico’s Playbook newsletter, adding:

Members have as well. … There are pros and cons to this: importing health care into a tax reform debate has consequences. … No decisions have been made, we’re listening to the members and certainly the president as well.

The Republican tax plan released Thursday by Brady, House Speaker Paul Ryan, R-Wis., and other GOP members collapses the current seven tax brackets to three, nearly doubles the standard deduction, and caps the amount taxpayers can write off in state taxes at $10,000. Some conservatives say the write-off encourages high-tax states to continue to raise taxes and forces low-tax states to subsidize them, as The Daily Signal previously reported.

The plan also lowers the the U.S. corporate tax rate, the highest in the industrialized world, to 20 percent from 35 percent.

The tax plan is meant to give advantage to Americans throughout all stages of their life, Brady said.

“These are tough calls, and the call is this, do we want a tax code that has special provisions you may use once in your life, or do we want a tax code that lowers rates and you get help every year of your life, that you choose whether you need it for student debt, or for medical expenses, or as we did, [to] adopt our few children, so it is a big change from the way we have the code today,” Brady said.

Lawmakers, he added, will hold firm on changing the tax code because they want to end the status quo.

“Here’s the challenge: you can’t lower rates, you can’t become more competitive if we keep everything just as it is,” Brady said. “You’ve got to challenge these provisions to get to where we want to get.”

President Donald Trump has made passing tax reform a goal of his first year in office and said Thursday that the GOP plan is “one of the greatest Christmas presents.”

Great Tax Cut rollout today. The lobbyists are storming Capital Hill, but the Republicans will hold strong and do what is right for America!

Brady said Trump has been a significant asset in the process to bring tax reform to the American people.

“He’s been engaged on all the tax reform issues both in substance and where he wants to go,” he said, adding:

He calls regularly, more often now, and just weighing in on these decisions and as we are finishing out sort of the last designs of what this initial bill will be, we were, I was, others were on the phone with him running through these options to make sure we are all on the same page.

Brady said the reason Republicans released the tax framework Sept. 27 was to build unity and avoid the problems Republicans have faced in their inability to repeal Obamacare.

“The whole purpose of this was to not do what we did in health care, you know, where the House, Senate, White House was never—still may not be—on the same page, that’s why we spent the months working with the White House, House, and Senate so there wouldn’t be three tax plans or five tax plans but one, and so having that target drawn on the wall for the House and the Senate to design to has been really helpful,” Brady said.