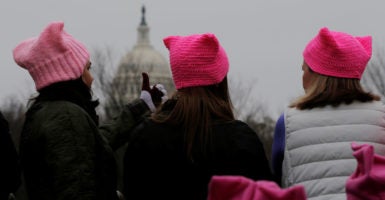 At the Women's Convention in Detroit, transgender activists accuse the movement of not being inclusive. (Photo: Brian Snyder/Reuters/Newscom)

DETROIT—In public, transgender activists often blame conservatives for being intolerant. But behind closed doors inside their own safe spaces, a different story unfolds—one in which the most ardent supporters of the Women’s March are the oppressors.

Speaking at the Women’s Convention in Detroit, an event organized by the leaders of the Women’s March, transgender women berated conference organizers for assuming transgender speakers were qualified to only speak on panels addressing trans-specific issues.

Kelsey Harkness and The Federalist’s Bre Payton discuss the Women’s Convention, motherhood, and much more on the latest episode of “Problematic Women,” above.

“Why is my voice confined to just one panel?” asked Katelyn Burns, one of three transgender women featured on the panel, “Not All Pussies Are Pink and Not All Women Have Pussies.”

The idea for the panel was inspired by the infamous pink hat, which millions of women wore on Jan. 21 as they marched in Washington, D.C., and around the world.

“Why is it that when I pitch editors on topics that aren’t trans-related, I never hear back from them?” Burns added. “At this point, the only way I get paid to eat is if I write about trans stuff, and I always question why that is … That trans-oppression is crushing.”

The tension in the room could be cut with a knife. Panelists went so far as to attack Women’s March organizers by name, accusing them of including transgender activists in their events to check a box.

The Women’s March has “personally harmed me,” transgender panelist Raquel Willis said, accusing Tamika Mallory, one of the march’s founders, of cutting Willis’ mic short during the Women’s March in January in order to make room for Madonna, Emma Watson, and other high-profile women.

“The leadership of the Women’s March allowed celebrity and agents of capitalism to become a part of the march so easily, and pushed more marginalized folks who have been on the ground.”

Showing up to elevate trans woman power at the #WomensConvention! We will definitely be #ReclaimingOurTime on this panel! pic.twitter.com/RPQ58z3jZG

A national organizer with the Transgender Law Center, Willis is a prominent voice in the transgender movement. After being asked how the Women’s March organizers can better ensure transgender individuals are included in the conversation surrounding feminism and womanhood, Willis expressed a sense of exhaustion.

“My agenda is for this greater vision of trans liberation, and that means I want to see most of this audience being trans,” Willis said. “Could you imagine how rich that conversation would be if we didn’t have to respond and coddle the ego of cis folks? … We never actually discuss and grapple with how much empathy it takes to be in a room educating and training our oppressors.”

Cisgender refers to a person whose identity corresponds with their biological sex.

“Include us in everything. The whole program. The planning, all of that,” added Lala Zannell, a transgender activist from Detroit. “Because when you don’t do that, you forget something.”

The panel revealed an uncomfortable truth: cisgender, white feminists who attended the Women’s Convention have more in common with their conservative counterparts than they might like to admit. According to transgender activists, neither side, it appears, can get it right.