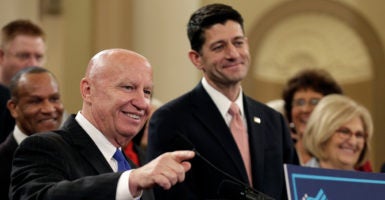 The details of the Republican tax reform plan released Thursday mostly reflect the goals laid out by President Donald Trump, including cutting the corporate tax rate and keeping a sharper focus on middle-class tax cuts, meaning an extra $1,182 per year for a median-income family.

The tax plan would keep the income tax rate for the wealthiest earners at the 39.6 percent rate. Trump and Republicans in Congress initially talked about reducing the number of tax brackets from the current seven down to three, but more recently talked of a fourth bracket for the wealthy.

As expected, the plan would cut the U.S. corporate tax rate, the highest in the industrialized world, from 35 percent to 20 percent.

“With this plan, we are getting rid of loopholes for special interest and we are making things simple,” House Speaker Paul Ryan, R-Wis., said Thursday in a press conference. “ … This is our chance to ensure that American families don’t just get by, they get ahead in this country.”

The plan released Thursday by House Republicans caps the amount people can write off in state taxes at $10,000. Many conservatives contend the write-off encourages high-tax states to continue to hike taxes and forces low-tax states to subsidize them.

For a small business on Main Street, the tax reform bill means savings of about $3,000 per year, while the typical median-income family of four earning $59,000 annually will see a tax cut of $1,182, noted Rep. Kevin Brady, R-Texas, the chairman of the House Ways and Means Committee, which writes tax laws.

“That’s your money,” Brady said. “You earned it and you deserve to keep it.”

Further, the plan will not affect retirement plans, even though some talk had surfaced about a cap on tax savings from 401(k) plans.

Tax reform leads Trump’s legislative agenda, and was made considerably easier after the Senate and House passed a budget resolution last month, meaning the tax reform proposal could be approved without a supermajority in the Senate. Trump hopes to attract some support from moderate Democrats to sign the bill before the end of the year.

In a statement, Trump said:

My tax reform priorities have been the same since Day One: bringing tax cuts for hardworking, middle-income Americans; eliminating unfair loopholes and deductions; and slashing business taxes so employers can create jobs, raise wages, and dominate their competition around the world. …

The special interests will distort the facts, the lobbyists will try to save their special deals, and some in the media will unfairly report on our efforts. But my administration will work tirelessly to make good on our promise to the working people who built our nation and deliver historic tax cuts and reforms—the rocket fuel our economy needs to soar higher than ever before.

Other elements of the plan released by the House have been talked about for months.

Trump’s daughter and presidential adviser, Ivanka Trump, has championed a child tax credit increase, which would increase from $1,000 to $1,600.

The plan calls for repealing the alternative minimum tax, which requires many taxpayers to calculate their tax liability more than once. The tax was initially intended to prevent abuse by the very wealthy, but ended up affecting millions of middle-class tax filers.

The plan was also unveiled on the seventh anniversary of the Republicans retaking the House of Representatives in 2010, McCarthy added.