What Can Be Done to Stop Vehicular Terrorist Attacks 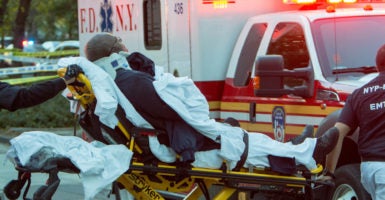 After the terrorist attack in New York City, an injured man is taken to the hospital. (Photo: Allan Tannenbaum/Polaris/Newscom)

Sayfullo Saipov’s attack in New York City, where he used a rented truck to mow down pedestrians and bicyclists, killing eight and injuring others, is unfortunately not the only time when terrorists have turned to this type of attack. Nor will it likely be the last time.

In fact, two vehicular attacks have already taken place in the United States before, both on university campuses. In 2006, Mohammed Reza Taheri-azar drove a Jeep into crowds of people at the University of North Carolina. Last November, Abdul Razak Ali Artan did the same with a car at Ohio State University.

Taheri-azar, Artan, and Saipov were all able to carry out their plans without law enforcement or intelligence agencies getting wind of them beforehand.

In Europe, too, there is yet to be an occasion—at least publicly disclosed—where authorities have discovered a vehicular plot ahead of time and then thwarted it. There have been 11 vehicular attacks in Europe with a clear Islamist motive, with seven taking place in 2017 alone.

Clearly, vehicular attacks are some of the hardest, if not the hardest of all, attacks to stop. Yet in the wake of Saipov’s attack, doing nothing is not an option.

Putting aside the long-term, ideological battle with Islamism for a moment, the U.S. must consider what practical steps can be taken to stop such attacks in the future.

The bad news is that there is no fail-safe approach. The British government is considering whether those renting vehicles should have their names checked against terrorism watch lists. However, while Saipov hired his truck, not all terrorists do. Those who carried out similar attacks in Stockholm and Berlin stole them.

Protective barriers are also being installed across Europe on bridges and near tourist sites. This may be necessary to save lives but risk physically altering the makeup of historical sites that millions of people visit a year.

Clearly, getting the right intelligence ahead of time is the best way to stop these attacks. That is what Australia used to prevent a vehicular attack plot.

Sevdet Besim was planning to use a vehicle to run over and then behead a police officer in Melbourne during Australia’s Anzac Day 2015 celebrations. Besim was in contact with “X,” a 14-year-old Islamic State supporter in the U.K. (not named for legal reasons). “X” implored Besim to carry out the attack and send him a martyrdom video that he could then forward on to his ISIS contacts in Syria.

“X’s” school alerted British authorities to its pupil’s radicalism after he claimed it would be “halal” to murder a teaching assistant and to have a list of teachers he wished to murder. Police subsequently searched “X’s” home and discovered encrypted voice communications with Besim on his smartphone.

British authorities informed their Australian counterparts of the imminence of the Anzac Day plot and arrested “X” in April 2015. Besim is now serving 14 years in jail; “X” will be released only when he is no longer regarded as a danger to society, but he must serve a minimum of five years.

Three factors were on the authorities’ side here. “X” had a history of publicly vocalizing his extremism; his school was willing to share these sentiments with appropriate authorities; and Besim and “X” communicated their plans electronically. Such factors are not present in every plot.

This case also demonstrated why governments must share intelligence with each other rapidly. The U.K. and Australia are part of the “Five Eyes” community, so on this occasion it was simple. That, too, will not be the case every time. Countries mutually threatened by terrorism need to carry on deepening their intelligence sharing relationships.

That process may not have saved lives in New York, although an investigation into what law enforcement could have done differently will likely be conducted. In the meantime, expect terrorists to rely increasingly upon the use of vehicles to carry out attacks: a simple tactic but, as proven again in New York, devastating.