This Simple Trick Will Help Liberals Get Over Trump Derangement Syndrome 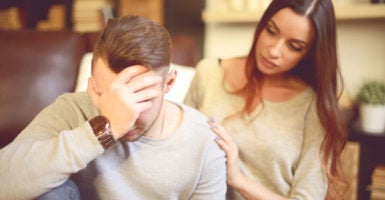 Many liberals have not yet acclimated to the reality of President Donald Trump's presidency. (Photo: iStock Photos)

I am not nearly so coldhearted and unsympathetic toward the mainstream media as some of my conservative friends, such as Rush Limbaugh, Mark Levin, Sean Hannity, Tucker Carlson, Chris Plante, and Ann Coulter.

In fact, my heart goes out to them.

As evidence of the same, if I had President Donald Trump’s ear, I’d urge him to declare this coming Tuesday, Nov. 7, a day of remembrance and order that flags be flown at half-staff on all federal buildings.

Why? It will be the anniversary of what must have been a most traumatic day for mainstream media people and the political pundits they interviewed.

I am not a psychologist. However, I did take several courses in psychology and sociology as an undergraduate. Thus, I have enough training to analyze the continuing trauma resulting from last year’s presidential election.

Days before the election, ABC News anchor George Stephanopoulos gleefully asked his guests about it. All except one predicted an Electoral College and popular vote landslide for Hillary Clinton.

On one MSNBC talk show, the panelists predicted a historic defeat for Trump. MSNBC host Rachel Maddow confidently and laughingly made predictions about Trump’s trouncing defeat at the hands of Clinton.

Not to be left out, there were Republicans who confidently predicted that Trump wouldn’t even win the party’s nomination, much less the presidency.

There were many other highly confident election predictions of Trump’s defeat all over the internet and in the media, both national and international.

Take the gleeful discussion between Maddow and Chris Matthews just prior to the election. It would have to be pure torture to make them watch their pre-election broadcasts.

Then, as election returns began to come in, showing Trump becoming the next president, there were many instances of emotional crackups. If you check out the internet, you will find dozens of instances featuring people crying and screaming and cursing the election results.

Some colleges responded to Trump’s victory by having cry-ins and primal screams. Some provided their students with therapy dogs, coloring books, Play-Doh, and videos of playful kittens and puppies, as well as serving snacks such as tea and chocolate.

Some college administrators encouraged or allowed faculty to cancel or postpone exams because of the election results.

Certain people have come up with a name for the ongoing liberal response to Clinton’s defeat. They call it Trump derangement syndrome.

I might point out that it’s not only leftist Democrats who are in a tizzy over the election results but also quite a few establishment Republicans.

Evidence of continuing Trump derangement syndrome can be found in the calls for his impeachment by members of Congress such as Reps. Maxine Waters, D-Ca., Al Green, D-Texas, and Brad Sherman, D-Calif.

There is a treatment for Trump derangement syndrome. Instead of watching MSNBC, CNN, ABC News, NBC News, and CBS News, one can turn to Fox News Channel and watch Bret Baier, Tucker Carlson, and Sean Hannity.

For newspapers, pick up The Wall Street Journal, The Washington Times, or the Washington Examiner. Try listening to Rush Limbaugh’s and Mark Levin’s radio shows.

By no means do I recommend that liberals go cold turkey on the mainstream media. They should start out by listening to conservative media for only about five minutes per day to avoid shock.

I am normally against any kind of insurance for a pre-existing medical condition, but I’d make an exception for Trump derangement syndrome.

Finally, when I think of some of the wacky presidential predictions, my mind immediately turns to 1997, when the comet Hale-Bopp appeared.

Art Bell’s paranormal radio talk show, “Coast to Coast AM,” claimed that a spacecraft was following the comet. That inspired 39 members of a San Diego cult named Heaven’s Gate, who believed that their souls could escape the doomed Earth on the spacecraft, to kill themselves.

Unfortunately for the predictors of Clinton’s landslide win over Trump, they haven’t been spared the embarrassment of being wrong.