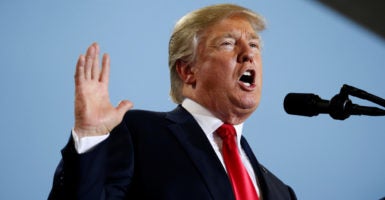 Twenty-four Republican lawmakers from high-tax states voted for the House budget resolution last week, despite pressure to oppose it because of the possible elimination of the state and local tax deduction in the GOP’s tax reform bill.

No Republican senator currently represents any of those seven “blue” states, but Republicans represent House districts in all of them except Connecticut and Massachusetts.

House Republicans from those blue states are expected to be a key bloc of votes for the GOP tax plan, given the narrow margin needed for passage. No House Democrats voted for the budget resolution Oct. 26.

The 24 Republicans from high-tax states who supported the budget resolution outnumbered the 11, all from New York or New Jersey, who opposed it.

Those who favor keeping the state and local tax deduction, however, made clear that the deduction would be a point of contention if it remains part of the tax reform plan when Republican leadership introduces their bill Thursday.

One of the 11 Republicans, Rep. Lee Zeldin of New York, urged colleagues to vote against the budget resolution as a point of leverage.

“There would need to be more progress made in figuring out the solution on this issue in order for me to vote for the resolution,” Zeldin said.

Rep. Claudia Tenney, R-N.Y., said she cast her vote against the House budget resolution for the same reason.

Rachel Greszler, a senior policy analyst for economics and entitlements at The Heritage Foundation, estimates that taxpayers in the seven high-tax states deduct 7.6 percent of their income in state and local taxes. For taxpayers in all other states, the percent of income deducted averages 4.2 percent, she says.

“No wonder lawmakers in those states are pushing to spare or revamp the deduction,” Greszler wrote in a recent commentary.

Here are the 24 Republican lawmakers from high-tax states who voted for the House budget resolution:

A total of 11 House Republicans from high-tax states voted against the GOP budget resolution, all from New Jersey or New York:

Eliminating the state and local tax deduction would provide roughly $1.3 trillion in new revenue for the U.S. government.

But lawmakers from high-tax congressional districts, such as in New York, say taxpayers count on the deduction and would have to pay more in federal income taxes if Congress scraps it.

The state and local tax deduction allows taxpayers who itemize instead of taking the standard deduction to deduct from their federal taxable income any property and income taxes paid to state or local government, Adam Michel, a tax policy analyst at The Heritage Foundation, told The Daily Signal.

The deduction, Michel said, “allows state and local governments to impose excessive taxes on their residents, and shift part of the burden to federal taxpayers in other states.”

President Donald Trump has made overhauling the tax code a top priority for Congress during his first year in office, and has used social media to communicate its importance.

Wouldn't it be great to Repeal the very unfair and unpopular Individual Mandate in ObamaCare and use those savings for further Tax Cuts…..

….for the Middle Class. The House and Senate should consider ASAP as the process of final approval moves along. Push Biggest Tax Cuts EVER

It would reduce the seven tax brackets to three: 12 percent, 25 percent, and 35 percent.

The number of proposed brackets may increase to four, however. Ryan said Oct. 20 that the tax plan will include a fourth bracket for high-income earners.

Ryan and other House leaders had intended to release their plan in the form of a bill Wednesday, but moved the release date to Thursday.

In consultation with President Trump and our leadership team, we have decided to release the bill text on Thursday. We are pleased with the progress we are making and we remain on schedule to take action and approve a bill at our Committee beginning next week.

Lawmakers who voted for the budget have their priorities in the right place, Heritage’s Michel said Wednesday.

“Those who voted for the budget and support the full elimination of the SALT [state and local tax] deduction have shown they understand the key tenants of pro-growth tax reform for individuals: lowering marginal tax rates and doing away with tax subsidies,” Michel told The Daily Signal in an email.

The state and local tax deduction, he said, “allows local governments to impose excessive taxes on their residents, and shift part of the burden to federal taxpayers in other states–creating a perverse incentive for the expansion of state and local bureaucracies beyond their means.”

“Any lawmaker who supports a limited government should support eliminating this federal subsidy for higher taxes at the state level,” Michel said.