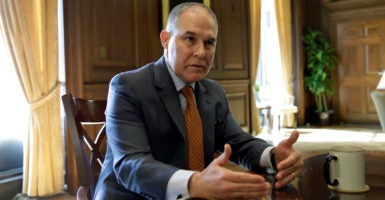 The nation’s top environmental protection official signed a directive Tuesday aimed at preventing conflicts of interest while bolstering the independence and integrity of scientists who advise the government.

Under the new policy announced by Scott Pruitt, administrator of the Environmental Protection Agency, researchers and scientists who currently receive grants from the agency are not eligible to fill open slots on three science advisory groups.

“Whatever science comes out of EPA shouldn’t be political science,” Pruitt, appointed by President Donald Trump, told reporters during a press conference at EPA headquarters in Washington. “From this day forward, EPA advisory committee members will be financially independent from the agency.”

Otherwise qualified applicants, including those from parts of the country seen as excluded from public service under the Obama  administration, will have a leg up as the EPA changes under the Trump administration.

The remarks by Pruitt, former attorney general of Oklahoma, focused on three major panels among the EPA’s 22 advisory committees.

In the past three years, members of the Science Advisory Board, the Clean Air Scientific Advisory Committee, and the Board of Scientific Counselors received about $77 million in direct EPA grants while serving, according to agency calculations.

In anticipation of Pruitt’s announcement, the Union of Concerned Scientists put out a critical statement earlier Tuesday from Andrew Rosenberg, director of the environmental advocacy group’s Center for Science and Democracy.

“Today, Administrator Scott Pruitt has made it clear that he has no interest in following the science and doing the job of protecting the public set out for him by law,” Rosenberg said, adding:

The EPA’s science advisory boards are supposed to be composed of the best experts in the field, putting their knowledge and skills to work on behalf of the public. Pruitt broke with precedent by refusing to renew the terms of several board members, and his choices to fill open slots are, in many cases, opposed to the laws the EPA enforces and funded by the industries the EPA oversees. This opens the door to political interference in science and, ultimately, puts us all at risk.

Pruitt initially made news about his intentions in an Oct. 17 interview with Rob Bluey, editor-in-chief of The Daily Signal, during The Heritage Foundation’s annual President’s Club meeting in Washington.

In answering a question Bluey selected from the audience, Pruitt revealed that he would issue a directive aimed at ensuring the “independence, transparency, and objectivity” of experts who serve on the agency’s scientific advisory boards.

On emotional issues such as climate change, Pruitt suggested, he could rule out science advisers with a history of taking EPA grants, sometimes “to the tune of literally tens of millions of dollars.”

Displays near Pruitt’s lectern Tuesday listed the number of applicants for each of the three boards, the number of states represented on the boards, and the tens of millions of dollars in grants distributed to board members in recent years. Jordan McGillis, a policy analyst with the Washington-based Institute for Energy Research, which favors free market solutions to energy policy, was among those in attendance. McGillis told The Daily Signal that Pruitt’s directive will help restore accountability where it has gone missing in government.

“A system of checks and balances is a hallmark of just governance,” McGillis said, adding:

At the macro level, Americans cherish accountability and demand that it be respected, but for too long now, practices susceptible to malfeasance at the bureaucratic level have gone overlooked. The EPA review processes are one such area. We need to have confidence that important decisions in Washington are subject to rigorous, objective scrutiny, and Administrator Pruitt is taking a step toward restoring that confidence.

Bonner Cohen, a senior fellow with the National Center for Public Policy Research, told The Daily Signal in an email that Pruitt’s directive will help recruit advisers with a fresh, independent perspective.

“By aggressively cleaning out the stables at EPA, Administrator Pruitt is showing a firm commitment to ending cronyism at the agency,” Cohen said. “For decades, EPA’s assorted advisory boards have been packed with people who could be relied upon to rubber-stamp EPA’s regulatory actions.”

As recipients of EPA grants, they weren’t going to bite the hand that was feeding them. Ridding these boards of people with a clear conflict of interest is not an attack on science; it is an attack on the old boys’ and old girls’ network that has actually narrowed the scope of scientific inquiry and review. And, by opening up these slots to researchers from historically unrepresented or underrepresented parts of the country, Pruitt will enable a lively and diverse scientific debate determine the future of the agency’s policies.

A separate memorandum issued with Pruitt’s directive, available here, details how the changes are designed to bolster the independence and integrity of the advisory boards. Kent Lassman, president and CEO of the Washington-based Competitive Enterprise Institute, a libertarian, free-market think tank, said the fact that scientific advisers received EPA grants created conflicts of interest that undermined the quality of their advice to top government officials.

“Before you even get to question of how valuable and accurate the advice is, the obvious conflicts of interest lowers the quality of this advice,” said Lassman, who attended the announcement. “The advisers need to be as pure as Caesar’s wife. There should not even be the appearance of a conflict.”

Pruitt said he intends new appointees to be more diverse and representative of the entire country than their predecessors. Myron Ebell, director of the Center for Energy and Environment at the Competitive Enterprise Institute, said earlier Tuesday that he supports Pruitt’s directive and encouraged Congress to build on the reforms.

“The scientific advice the administrator receives from these boards must be objective and free from even the appearance of conflicts of interest,” Ebell said.

“The fact that some of the EPA’s advisory boards are filled with members whose research receives millions of dollars of funding from the EPA is an obvious conflict of interest that should never have been allowed to develop,” he said. “Advice from people who are financially dependent on those they are advising may of course in many instances be sound, but it will always be suspect.”

In his remarks at the Heritage event, Pruitt said:

I think what’s most important at the agencies is to have scientific advisers who are objective, independent-minded, providing transparent recommendations to me as the administrator and to our office on the decisions that we’re making on the efficacy of rules that we’re passing to address environmental issues.

If we have individuals that are on those [scientific advisory] boards that are receiving money from the agency, sometimes going back years and years to the tune of literally tens of millions of dollars over time, that to me causes questions on the independence and the veracity of the transparency of the recommendations that are coming our way.

Pruitt also specified the Science Advisory Board, the Clean Air Scientific Advisory Committee, and the Board of Scientific Counselors as concerns during his interview at the Heritage event.

The EPA administrator also drew a parallel with steps he already had taken to end the practice known as sue and settle, which he said enabled federal agencies to “engage in rulemaking through the litigation process.”

Critics faulted the practice for permitting environmental advocacy groups to set regulatory policy without input from the public or Congress.

Pruitt’s directive immediately affects the 47-member Science Advisory Board, which is charged with reviewing the quality of scientific information that underpins EPA regulations. The board also reviews EPA research programs and directly advises the administrator.

Terms for 15 members are set to expire, and the agency published a list of 132 possible candidates for the open seats.

Some on the list have expressed skepticism in one form or another toward the idea that human activity is the primary driver of climate change, to the consternation of some environmental advocacy groups.