I’m a Conservative at Princeton. Why My Fellow Student Is Wrong to Make War on Free Speech. 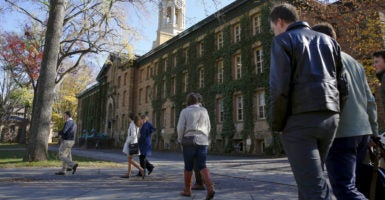 A junior at Princeton University wrote for the student paper that conservative ideas do not deserve a hearing. (Photo: Dominick Reuter/Reuters /Newscom)

Owen Wheeler is a member of Princeton University's Class of 2020.

Ryan Born, a fellow student with me at Princeton University, made waves a few weeks ago when he wrote in the student paper that conservatives should stop appealing to free speech.

In fact, he said conservatives don’t deserve the “right to speech” because “if conservative arguments were strong … they would not meet political opposition.”

Aside from being obviously incoherent—strong arguments meet reasonable opposition all the time—this latest flash of leftist sentiment is disturbingly intolerant.

Thankfully, one professor and another student wrote op-eds in the student paper rebuking Born’s intolerance. But if his view in any way represents the liberal population at Princeton at large, I fear for the student body.

I am inclined to believe there are more conservative students on my campus than initially meet the eye—but one wouldn’t guess that naturally, given the way liberal Princeton students denounce their conservative counterparts and cause them to walk around campus with their heads hung low.

After having been associated with “a bunch of racist f—s” from the South, having been given dirty looks from people after I told them I’m from a state that was critical in helping Donald Trump win the election (Florida) despite not even voting for him myself, and witnessing someone use the explanation “That’s how whiteness works” to describe how white people can apparently get away with doing anything they want scot-free, I’ve learned that there is often little hope in voicing any dissenting opinions in this environment.

Conservative voices are more likely to get shot down than engaged in a rational dialogue.

The main thing I take issue with in Born’s discussion is his quickness to add layers to free speech that didn’t exist in the first place. He writes:

When conservatives appeal to ‘free speech,’ it is actually a calculated political move, designed to open up avenues of political discourse while shaming others from moving in active political opposition.

It’s actually the opposite. Free speech is in fact a means for intellectual diversity and openness of discussion, not an exclusionary tool used to disengage opposing groups from “moving in active political opposition.”

Free speech actually invites political opposition because it gives people the right to say whatever they want, which can include things that elicit responses from opposing groups who can then use their own freedom of speech to voice their opposition without fear of arbitrary consequences.

This is what free speech is designed to do: facilitate discussion on issues in order to solve them, rather than silence opposition and shut down ideas.

So when Born argues “against [conservatives’] right to be heard and accepted,” this is problematic.

This idea helps nobody. Liberals who adopt this view will only contribute to the alienation of conservatives until neither side can reasonably discuss anything.

I have even witnessed this happen between students over a fight about something on Facebook. A conservative student arguing against a liberal student over transgenderism and gay marriage was told by the liberal student that he had no time for opinions that threaten his humanity.

As one could expect, the argument went nowhere because nobody was listening to what anyone had to say, plunging the petty dispute into an unproductive screaming match.

Born said conservative appeals to free speech are “insulting and condescending.” He tells conservatives that instead of appealing to free speech, they should focus on adopting better arguments for their positions.

It’s hard to advance those positions, of course, when you’re still being shouted down relentlessly.

What Born misses is that leftists don’t merely shout down white supremacy and Nazism—conservatives have joined in condemning those voices in recent months. Leftists also shout down mainstream conservative ideas that have been refined for centuries.

That’s why we appeal to free speech. When you are denied the ability to voice the most compelling and rational arguments for conservative ideas, the problem is not with your arguments. It’s with the intolerant students who are shutting you down.

Born is blind to the realities that conservative students face on campus. Rather than acknowledge the universal right to free speech—as any true liberal should—he impugns conservatives’ motives and questions the legitimacy of their right to speak.

A better path is to engage in open, free discussion that allows ideas to truly compete. More speech, more debate, and more critical thought are the answer.