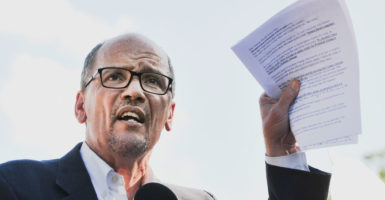 The Electoral College “doesn’t have to be there,” says Tom Perez, chairman of the Democratic National Committee, pictured here during a June 1 rally near the White House protesting Trump administration policy on climate change. (Photo: Jay Mallin/ZumaPress/Newscom)

The head of the national Democratic Party incorrectly said the Electoral College is not “a creation of the Constitution.”

In  a lecture at Indiana University Law School, Tom Perez, a lawyer who is chairman of the Democratic National Committee, said the Electoral College “doesn’t have to be there” and asserted that the national popular vote should be the principal standard.

“The Electoral College is not a creation of the Constitution. It doesn’t have to be there,” said Perez, who was secretary of labor during President Barack Obama’s second term and is a former assistant U.S. attorney general for civil rights.

Article II of the Constitution, however, clearly outlines the electoral process, dictating that states must appoint electors who meet and vote for the president:

Each State shall appoint, in such Manner as the Legislature thereof may direct, a Number of Electors, equal to the whole Number of Senators and Representatives to which the State may be entitled in the Congress: but no Senator or Representative, or Person holding an Office of Trust or Profit under the United States, shall be appointed an Elector.