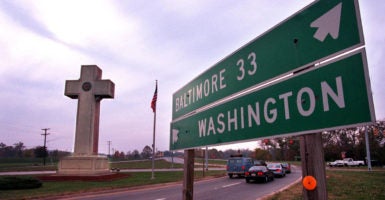 War memorials can be easy to miss. They’re often tucked away in small parks, virtually invisible to all but those who approach them on foot.

Not so the Peace Cross.

Standing more than 40 feet high, the concrete edifice was dedicated almost 100 years ago “to the heroes of Prince George’s County, Maryland who lost their lives in the Great War for the liberty of the world.”

Each of the four faces of the cross is inscribed with a word: “valor, endurance, courage, devotion.”

If this strikes you as a fitting and dignified expression of gratitude to those who gave what President Abraham Lincoln called “the last full measure of devotion,” consider yourself lucky.

After all, you could belong to the American Humanist Association. The atheist group considers this striking memorial to be not only offensive, but unconstitutional.

In fact, the group has been suing for years to have the Peace Cross removed. In their view, the cross—which was listed on the National Register of Historic Places in 2015—carries “an inherently religious message and creates the unmistakable appearance of honoring only Christian servicemen.”

The American Humanist Association has been rebuffed by the courts before, but on Oct. 18, they finally got their way. A three-judge panel of the 4th U.S. Circuit Court of Appeals ruled 2-1 that the Peace Cross amounts to a government sponsorship of a particular religion.

That would mean it violates the establishment clause of the First Amendment.

Except, of course, that it doesn’t.

To understand why, consider why a Maryland federal judge, Deborah Chasanow (a Clinton appointee), threw out the American Humanist Association’s case in 2015.

In an effort to prove that the Peace Cross somehow violates the establishment clause, the group offered a “Washington Post column indicating that there were at least three Sunday religious services held at the monument in 1931.”

And actually, that’s it. They had to go back more than 80 years to make their feeble case.

The judge countered this by noting that the “vast majority” of events and gatherings at the Peace Cross have been in “commemoration of Memorial Day or Veterans Day.” In other words, they haven’t been inherently religious at all.

Moreover, the court could find no evidence of any “religious purpose whatsoever” in the work of the commission that erected the Peace Cross. Indeed, the record showed that it was “a predominantly secular one.”

Yes, a cross is “undeniably a religious symbol,” Chasanow noted. But courts have long recognized that “displaying a cross to honor fallen soldiers is a legitimately secular purpose, and does not always promote a religious message.”

Fast forward to today, and it’s a different story—at least according to two of the judges on the 4th Circuit Court. Now the Peace Cross, which is the “core symbol of Christianity,” allegedly “excessively entangles the government in religion” and must come down.

Chief Judge Roger L. Gregory was the dissenting voice of reason. He pointed out, quite correctly, that it’s not the government’s duty to “purge from the public sphere any reference to religion.”

Yet that’s how groups such as the American Humanist Association view the First Amendment.

They look at it not as it was intended—as a way to prevent the establishment of an official state religion—but as a weapon to drive every last expression of religion underground.

Gov. Larry Hogan of Maryland, fortunately, has vowed to fight what he rightly called an “outrageous” decision:

“The idea that memorializing our soldiers killed in battle on foreign lands to make the world safe for democracy is somehow unconstitutional goes against everything we stand for as Americans. Enough is enough.”

He’s absolutely right. Only one thing may be worse than losing the war—and that’s losing the peace.

If the American Humanist Association successfully uses the First Amendment to trash a beautiful tribute to the men who died fighting for it, the irony will be rich indeed. Keep the cross.