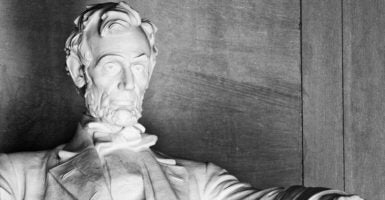 There’s a common quote, frequently attributed to G.K. Chesterton: “Don’t ever take a fence down until you know the reason why it was put up.”

In our modern context, this should be rephrased a bit: “Don’t try to pull down a statue if you have no idea who or what the statue was really about.”

During a 2016 Columbus Day protest conducted by Wunk Sheek, a Native American student organization, activists at the University of Wisconsin-Madison campus hosted a “die-in” at Bascom Hall, near a statue of President Abraham Lincoln.

According to The Daily Cardinal, a campus newspaper, the protest ended with the group hanging a sign on the Lincoln monument that said “#DecolonizeOurCampus.”

The activist group is now demanding a disclaimer be put up saying Lincoln was complicit in the murder of Native Americans.

Why would they be so angry about Lincoln?

“Everyone thinks of Lincoln as the great, you know, freer of slaves, but let’s be real: He owned slaves, and as natives, we want people to know that he ordered the execution of native men,” said one of the protesters.

“Just to have him here at the top of Bascom is just really belittling.”

This claim from the protester is patently false. The Great Emancipator grew up in poverty and never owned slaves.

Not only that, but his debates with fellow Illinois statesman Stephen A. Douglas offer some of the clearest reasons for why the institution of slavery violated the American creed.

Lincoln saved the union and brought about the end of slavery. Period.

Wisconsin educators, it appears you have some work to do. This is a basic fact that most Americans should learn before graduating high school, let alone while attending an institution of higher learning.

But beyond that basic ignorance, simply stating the fact that U.S. soldiers executed Sioux Indians while Lincoln was president doesn’t begin to do justice to what was a very complex situation in the middle of the Civil War.

During the war, Minnesota was in a state of chaos due to soldiers abandoning their posts and armies moving east to join the main war effort. On top of that, the Office of Indian Affairs was mired in corruption that was exacerbated by wartime negligence.

As a result, money promised to the Sioux tribe in Minnesota in exchange for its land wasn’t coming through, and many of its people starved.

This led to a bloody uprising called the “Dakota War,” which the U.S. government eventually put down.

Over 300 Sioux were sentenced to death for connection to the rebellion. Lincoln saw this as extreme, however, and pardoned all but 38 of the alleged perpetrators, whom he believed were guilty of the worst crimes such as rape and murder.

It was the largest mass hanging in American history, but it could have been much worse if not for Lincoln’s compassion. He believed that the Sioux were getting a raw deal, but needed to ensure peace on America’s borders in a time when the future of the United States was seriously in question.

It’s amazing that Lincoln acted at all in this matter, given that the nation was gripped by a bloody civil war more deadly than all of our other wars combined.

As Matt Vespa wrote in Townhall, “It’s not one of our nation’s best moments, but Lincoln was also fighting a much more existential threat to the country[:] an army from the southern states that at the time … was winning the American Civil War.”

It’s silly to judge Lincoln’s actions without some understanding of the circumstances of the time. But this is generally what has sustained the iconoclast statue movement.

Figures of our past are dehumanized, their actions put in a vacuum, only to be narrowly judged by the increasingly absurd, ever-evolving standards of our time.

This is why it was such a short jump from attacking statues of Confederate Gen. Robert E. Lee to Lincoln, even though these men stood on opposite sides of the conflict that shook our nation and decided what we would become in the centuries that followed.

The anti-statue crusade thrives on shallow 21st-century moralizing—the privilege of the prosperous and comfortable, far removed from the suffering and difficulties of earlier times—coupled with the sheer ignorance of a generation that has little understanding of the basic facts of our history.

But the iconoclasts do not just see Confederates or Christopher Columbus or Lincoln as problematic. The movement is about more than these individuals. It’s an attempt to delegitimize and erase the very foundation of our civilization, which to them, is irreparably flawed.

This article has been updated to note when the University of Wisconsin-Madison protest took place.