Why the Left and Right Clash Over National Identity 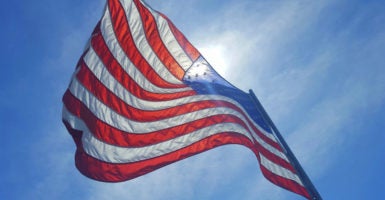 The left tends to favor international identity over national, preferring institutions like the European Union and the United Nations. (Photo: iStock Photos)

In 2011, after 899 issues and 73 years of publication, Superman, the most famous American comic book character, announced that he was renouncing his American citizenship.

“I intend to speak before the United Nations tomorrow and inform them that I am renouncing my U.S. citizenship,” Superman announces. He then adds, in reference to his famous motto: “Truth, justice, and the American way—it’s not enough anymore.”

After a national uproar, the comic publisher announced that this theme would not be revisited in any future edition of the comic. But an important point was made. To the liberal publishers of Superman, the hero’s American identity just didn’t feel right.

Maybe that was what people wanted from 1938 to the late 20th century. But this national identity stuff has got to go. We should all be world citizens.

This example illustrates a primary difference between left and right: their respective views of nationalism and national identity.

The rejection of national identities began with the founder of leftism, Karl Marx. He ends his major work, “Das Kapital,” with the famous left-wing motto, “Proletariat of the world, unite; you have nothing to lose but your chains.”

Marx regarded national identities as backward and useless. In his view, the only identities that mattered were class identities—the working class and the ruling class. If a worker thought of himself first as a German or Englishman, rather than as a worker, communism would never be achieved.

The rejection of nationalism in Europe became mainstream after World War I. Many Europeans, especially among the intellectuals, concluded that the unprecedented loss of life caused by the Great War was a result, first and foremost, of nationalism.

They concluded that Europeans slaughtered each other for nothing more than a flag and a national identity. Therefore, the argument went, by abolishing nationalism, war could be abolished.

That is the belief that led to the creation of the European Union: The more Europeans identified with Europe rather than with a particular country, the less likely were the chances of war between European countries.

In the United States, however, a national American identity has always been a major part of what it means to be an American.

The three pillars of Americanism, constituting what I have called the “American Trinity,” are found on every American coin and banknote: “Liberty,” “In God We Trust,” and “e pluribus unum.” The latter is Latin for “out of many, one.”

Because America has always been a nation of immigrants, it has no ethnic identity. Therefore, unlike almost all other nations, America could not depend on an ethnic identity to keep its people together.

In fact, if all Americans retained their ethnic identities, America would simply splinter. So a nonethnic American national identity had to be forged and preserved.

To this day, foreigners in the United States are struck by how patriotic Americans are in comparison to whatever country they come from.

They marvel, for example, at the fact that before almost every sporting event—from professional down to high school—the American national anthem is played and/or sung.

Conservatives wish to conserve all these manifestations of American patriotism and nationalism because they believe a sense of national unity is essential to the political and social health of the country.

On the other hand, the American left, like the left in Europe, is opposed to nationalism, and it generally finds patriotic expressions corny at best and dangerous at worst.

Left-wing opposition to American nationalism is exemplified by the left’s embrace of “multiculturalism”—the cultivation of all ethnic and racial identities except American. It has even reached the point wherein some American colleges no longer display the American flag.

To conservatives, such ideas are anathema because, in addition to subverting American sovereignty, the United Nations has not done nearly the amount of good in the world that the United States has.

That’s why the liberals at DC Comics had Superman renounce his American citizenship (at the United Nations, no less). In their view, Superman is now even more super. In conservatives’ view, the renunciation is kryptonite.