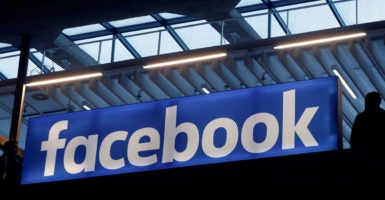 "Facebook seems to enforce their policy more on conservatives than liberals,” Allen Muench told The Daily Signal, citing suspensions and other apparent censorship by the media behemoth. (Photo: Philippe Wojazer/Reuters/Newscom)

A retired accountant says Facebook has suspended and otherwise censored him multiple times since the 2016 presidential campaign for posting certain conservative content.

Allen Muench, 62, a resident of St. Louis, Missouri, said he spends much of his time running a conservative Facebook page that often supports President Donald Trump and is critical of liberals.

After posting conservative memes or articles from websites such as Breitbart, he has seen Facebook limit or completely cut off his access, Muench told The Daily Signal in a phone interview.

“Our biggest challenge is Facebook’s political bias and their enforcement of their Community Standards policy,” Muench said. “Facebook seems to enforce their policy more on conservatives than liberals.”

“They have things like ‘You’re posting too fast,’ and then you seem to fall into like a few hours [of suspension],” Muench, who worked as an accountant for 35 years, said. “The next time you get six hours, then a day, then a week, then two weeks.”

Topics that get him suspended by the social media giant, he said, include Islam, homosexuality, Michelle Obama, and certain news outlets.

He started managing a Facebook page about the time Trump announced his campaign for president in June 2015, Muench said, and he believes Trump won the White House in part because of Facebook.

Muench’s Facebook page, called Health and Global News, has over 13,000 likes. He said he targets independents and people who usually don’t vote.

As examples of Facebook’s censorship of his page, Muench said the company suspended him for one week after he posted a Breitbart article titled “Two Afghans Arrested for Raping 16-Year-Old on German City Street,” and again after he posted an article from the Liberty Writers site titled “Minutes Into His Memorial Day Speech Today, Trump Paused and Revealed the Unthinkable.”

Facebook also sent him error notices, Muench said, for posting too much in a certain amount of time and when he tried unsuccessfully to post links to certain articles.

Here are some examples he provided to The Daily Signal: Muench told The Daily Signal that although Facebook messaged him that he was “going too fast,” he actually posts slowly, like a “little old lady.” He received one suspension by Facebook for posting too fast, Muench says. Muench said he received a suspension because he was “doing a lot on Facebook.” A friend tried to post a link to an article on his Facebook page and received an error message, Muench says. Facebook suspended him  for two weeks for posting a Bill Clinton and Harvey Weinstein meme,  Muench told The Daily Signal. The meme that Muench says got him suspended by Facebook for two weeks.

Last year, some conservatives accused Facebook of anti-conservative bias in its news feed. The company assured such critics that it provides a platform for sharing all ideas and invited a group of prominent conservatives to meet with Facebook founder Mark Zuckerberg about the concerns.

Facebook’s published policies mention “hate speech” multiple times, including in its Statements of Rights and Responsibilities: “You will not post content that: is hate speech, threatening, or pornographic; incites violence; or contains nudity or graphic or gratuitous violence.”

This could limit what Facebook members say, whether they are conservative or liberal, depending on how the company interprets its own rules, which it does not specify.

A Facebook spokeswoman said the company does not comment on individual cases to protect privacy, but that it did not suspend Muench for the topics of his posts.

She said Muench was posting a large amount, including to various Facebook groups, which the company’s system could identify as spam because he often posted almost identical content or content that some members of groups didn’t like.

Muench was not violating Facebook’s Community Standards, the spokeswoman said, and the error notices he saw when posting also could result from his posting too fast.