My Bill Would Stop Tax Dollars From Subsidizing the NFL 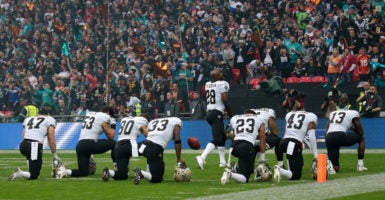 New Orleans Saints players kneel down before the national anthem prior to playing the Miami Dolphins. (Photo: Hugo Philpott/UPI/Newscom) 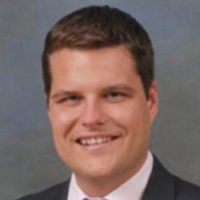 NFL players have protested the national anthem for a little over a year now.

But has kneeling helped them raise awareness? Has their weekly spectacle changed any policies or laws? No. If anything, their protest has backfired spectacularly—it’s simply made a lot of Americans stop watching football.

No one should be surprised—kneeling during the national anthem isn’t a good way to focus attention on a topic. The gesture is a broad, overgeneralized indictment of America. It is not a critique of injustice, nor does it pave the way for meaningful reform.

There are better ways to protest, and better venues for protest than football games.

It’s easy to have strong, visceral feelings about disrespecting America. It’s harder to get passionate about tax law. But if there was ever a time to feel outraged over the tax code (other than Tax Day), that time is now.

Section 501 (c)(6) of the Internal Revenue Code provides a list of tax-exempt trade organizations: business leagues, chambers of commerce, real estate boards, boards of trade, and professional football leagues. Which one of these things is not like the others?

I call a brief timeout for a history lesson.

The NFL was first granted tax-exempt status in 1942. When the NFL and AFL merged in 1966, Commissioner Pete Rozelle wanted the NFL’s tax exemption made permanent. Meanwhile, two Louisiana Democrats wanted a football team, and an only-in-Washington opportunity presented itself.

According to Michael MacCambridge, author of “America’s Game: The Epic Story of How Pro Football Captured a Nation,” Rozelle was so delighted to hear the tax news that he said, “Congressman Boggs, I don’t know how I can ever thank you enough for this.”

Boggs immediately countered with, “What do you mean you don’t know how to thank me? New Orleans gets an immediate franchise in the NFL.”

Sure enough, one year later, the Saints came marching in.

To be clear, the tax exemption does not apply to teams. Teams and players both pay taxes. The status applies solely to the NFL League Office.

Stadiums are funded primarily by taxpayer dollars, brought in through increased taxes and municipal bond financing schemes. Over the past decade, $7 billion in taxpayer dollars were spent on stadiums. In some egregious cases, cities built new stadiums even while their citizens were still paying off old stadiums that had since closed.

This is corporate welfare run amok, and a gross misuse of American citizens’ tax money—something the government must treat with respect.

As many pundits have noted, the NFL League Office voluntarily gave up its tax-exempt status in 2015. Until the tax code changes, however, it can revert to being tax-exempt whenever it chooses.

Equally importantly, the NHL, PGA Tour, and LPGA are also currently tax-exempt, despite earning over $2 billion per year in gross revenue.

These are truly “tax breaks for billionaires,” to quote Sen. Bernie Sanders, I-Vt., and the textbook definition of a special-interest loophole. It’s time to revoke this unnecessary, undeserved tax break. Why should “big sports” get tax breaks that businesses and families across America don’t get?

That’s why I’ve decided to be the lead sponsor of H.R. 296, the PRO Sports Act, a bill that would end the tax-exempt status for sports leagues making over $10 million annually.

I’ve sent a letter to Rep. Kevin Brady, R-Texas, chairman of the Ways and Means Committee, asking for this to be included in the tax overhaul.

With tax reform currently one of the highest priorities of Congress, it’s time to end this unjustified, unjustifiable provision.

In 2016, the Joint Committee on Taxation estimated that the PRO Sports Act would bring in over $150 million in new revenue. With America $20 trillion in debt, every dollar helps—and, more importantly, it restores some fairness to the tax code.

If players choose to protest, then I can choose not to watch. It’s as easy as turning off the television. But the tax code means that all taxpaying Americans are financially supporting pro sports, whether they want to or not.

Ending this tax break would change things. If players want to protest, let them do it on their own time, and on their own dime. The American people shouldn’t have to pay for it.