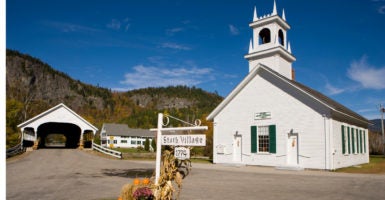 HANOVER, N.H.—There is a strong correlation between lack of religious attendance and illicit drug use, research shows in contrasting two states hit hard by the opioid crisis.

The parallels are demonstrated by two comparative studies of New Hampshire and West Virginia.

“It’s not just economics causing the overdose problems. There are other factors,” Moody told The Daily Signal.

A large and growing body of evidence shows that not only can religion help prevent people from using illicit drugs, but it also plays a strong role in effective treatment programs. … The northeastern states dominate the upper-left quadrant of the chart [see page 123], where low religiosity is correlated with high drug use, while deep southern states and Utah dominate the lower right quadrant, where high religiosity is correlated with low drug use.

Moody noted that New Hampshire has a serious problem, not only with opioid addiction, but also a related problem with a high suicide rate. One in 10 young adults say they have had suicidal thoughts.

“You have to ask, why is that? Our economy is booming. We’re pretty much at full employment. Anybody who wants a job can find a job,” Moody said. “So we looked at more social-type issues. For example, New Hampshire is one of the least religious states in the country. It’s New Hampshire, Vermont, and Maine. It’s a race to the bottom. … We suggest there is a strong correlation between illicit drug use and religious attendance.”

By contrast, data seems to be showing some improvement in West Virginia, he said.

“Ironically, West Virginia is much more religious than northern New England, and that has actually suppressed their illicit drug use, which was a positive for West Virginia, but they still have a suicide problem along with it,” Moody said.

West Virginia’s illicit drug use rate as a percent of population exceeded the national average in most years; however, the state has seen some reversals.

The study released in September says, “In 2014, West Virginia has the 20th-lowest illicit drug use rate (except marijuana) at 2.5 percent and the second-lowest regionally, just ahead of Virginia (2.3 percent, 14th-lowest).”

While West Virginia’s current low ranking is encouraging, the recent bounce-back between 2013 and 2014 suggests continued vigilance is needed, as it may indicate a return to a higher illicit drug use rate (except marijuana) in the years ahead (perhaps to levels of the near past between 2004 and 2010).

A significant reason for why West Virginia’s illicit drug use rate is relatively low is due to the state’s above-average religious attendance. In 2015, 44 percent of West Virginians attended church at least once per week (tied for the 17th-highest with Missouri and Indiana), which is 16 percent above the national average of 38 percent.

Other national research backs this up more broadly on drug use.

The reports point to a 2001 study, “So Help Me God: Substance Abuse, Religion and Spirituality,”  from the National Center on Addiction and Substance Abuse that found:

A 2005 study, “Faith Matters: Race/Ethnicity, Religion and Substance Use,” from the Annie E. Casey Foundation, a research center focused on education and opportunities for young people, found:

Religion is an important protective factor against substance abuse and an important support for persons in recovery. Religious people are less likely than others to use drugs and less likely to experience negative drug-related consequences.

The office of Sen. Mike Lee, R-Utah, is also conducting the Social Capital Project, a multiyear research effort looking at “associational life,” which includes families, communities, workplaces, and religious congregations. The report doesn’t single out religion as a mitigating factor to addiction, but notes that isolation is a major cause.

“Studies show that social networks influence the behavior of their members, affecting whether they are obese or fit, happy or sad,” the Lee project says. “The stark fact is that socially isolated people and others without social support die younger. Even among people with adequate social support, health status is connected to the health of their friends, family, and co-workers.”