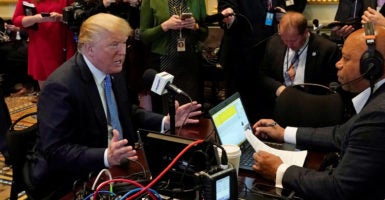 Congress should get rid of federal taxpayers’ deduction for state and local income taxes because it ends up costing most taxpayers billions of dollars, an organization that advocates state-level reforms says in an open letter to lawmakers.

Removing the deduction will save $1.5 trillion over the next 10 years, the American Legislative Exchange Council said in the letter, published Monday.

“In a show of unity from across the nation,” ALEC said in a press release, more than 100 affiliated state legislators signed the open letter to Congress urging elimination of the state and local tax deduction and passage of “real tax reform.”

“The legislators from 34 states represent millions of constituents from all corners of the country, including high-tax states such as Maryland, Pennsylvania, and Minnesota,” the group said.

The open letter comes as President Donald Trump and Republican members of Congress hope to pass tax reform before the end of the year.

According to the Tax Policy Center, the state and local tax deduction is for taxpayers who itemize their real estate, personal property, and either income or general sales taxes.

The state and local tax deduction “is one of the largest federal tax expenditures,” the Tax Policy Center said on its website, “with an estimated revenue cost of $96 billion in 2017 and $1.3 trillion over the 10-year period from 2017 to 2026.”

But many Americans aren’t seeing the benefits, ALEC argues in the open letter:

Only 30 percent of tax filers itemize at all for the simple fact that individuals must choose between the ‘standard deduction’ of either $6,300 or the total of all other allowable deductions. In other words, all workers pay state and local taxes; but only the minority of workers who itemize deductions see a partial ‘refund’ of those taxes paid.

In a teleconference Monday, ALEC’s chief economist, Jonathan Williams, argued that the state and local tax deduction “gives states the incentive to overspend and over-tax.”

Economic policy analyst Stephen Moore said he worked on the original Trump tax plan, and one of the concerns addressed in the plan was the state and local deduction. Moore, distinguished visiting fellow for the Project for Economic Growth at The Heritage Foundation, said the deductions are “quite unfair to the low-tax states.”

Supporters of the deductions say they allow states to collect more revenue to benefit local communities.

The National League of Cities, an organization of municipal governments, for example, argues that local governments get “the flexibility to raise needed revenues without concerns of double taxing their residents.”

During the teleconference, Griffith used the corporate income tax as an example of an actual double tax. Corporations pay a tax on income, and then shareholders pay another tax on the same income.

Constitutionally, Griffith said, the federal and state governments are sovereign, providing different benefits to citizens. For example, while some state tax revenue goes to building and fixing state highways, some federal tax revenue goes to strengthening the military or providing Social Security. Citizens, he noted, aren’t being taxed twice for the same benefits.

State Sen. Jim Buck, R-Ind., said during the teleconference that the deductions make it “highly unfair” to states trying not to use the system to raise their own taxes. He called for states to take more responsibility.

“The only way to make America great again is to make our states great again,” Buck said.