Starting a New Business Shouldn’t Be This Hard 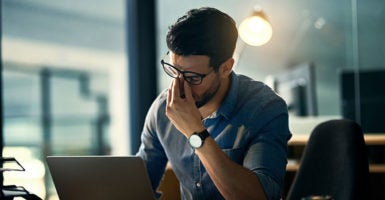 Small business owners report that they would spend an average of $83,000 complying with regulations if they started a business today. (Photo: iStock Photos)

A new National Bureau of Economic Research study has quantified the impact of America’s generation-long decline in business startups, and the results are not pretty.

From 1980 to 2014, the lack of startups lowered overall business productivity growth by at least 3.1 percent. The authors estimate that if Americans had continued to start new businesses at the pre-1980 rate, average family income would be $1,600 per year higher today.

The paper shows that, as a group, new businesses have 20 percent productivity growth in their first five years, 15 percent of which is in the first 12 months. By contrast, established companies have relatively stagnant group productivity, with very old companies struggling more.

The rapid growth within younger cohorts of companies is caused by a reallocation of resources to more efficient businesses, as well as the shutdown of inefficient new startups. Each cohort starts with a wide spread of productivities, but market discipline eliminates the least productive and expands the role of the most productive.

As each new cohort enters the business landscape, it nudges overall productivity slightly higher, and hires workers and capital away from older businesses that are struggling.

Regrettably, a “startup deficit” has formed in recent decades, with fewer new businesses forming than before 1980. Due to the higher productivity growth of new business, this deficit has become a substantial drag on the economy. The relative dearth of startups may help explain why American workers feel insecure about their role in the economy, despite a low unemployment rate and longer than usual job tenures.

If the market is not thick with new opportunities, the cost of becoming unemployed is higher, so the prospect is more frightening—even if it is also less likely than at many times in the past.

There is evidence that the general increase in regulation since 1980 is partly to blame. Surprisingly, this is a development Congress saw coming, and something it tried to limit.

In 1980, Congress passed the Regulatory Flexibility Act, mandating that before instituting new regulations, government agencies attempt to determine the economic impact of the rules on small businesses.

Despite this law, the compliance costs—both of real regulatory limits and paperwork nuisances—have piled up for small business owners.

According to a National Small Business Association survey, small business owners report that if they were to start their companies today, they would pay an average of $83,000 on regulations just to get off the ground.

According to the survey, the businesses pay an additional $12,000 a year, on average, in direct and indirect regulatory costs to keep running.

The decline in dynamism should not just concern economists or prospective entrepreneurs—it has a real pocketbook impact on all American workers and consumers.

Restoring a pro-growth climate and reducing the costs of regulatory compliance should be a top priority for policymakers at the federal, state, and local levels.