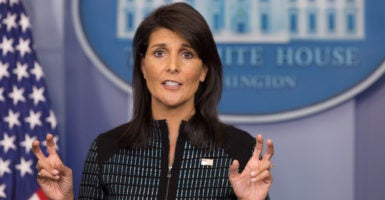 Recalling the foreign policy failures of three past administrations with regard to North Korea, U.S. Ambassador to the United Nations Nikki Haley is suggesting following the negotiating model of President Ronald Reagan instead.

“Not so long ago, an American president inherited an international arms control agreement negotiated by his predecessor,” Haley told a crowd of more than 900 in Washington on Monday night for the annual gathering of The Heritage Foundation’s President’s Club.

She said allies warned that U.S. credibility was on the line, while the press “warned that if the president did not adhere to the agreement he inherited, there would be war.”

Haley was referring to the Strategic Arms Limitations Talks II agreement of 1979 between the United States and the Soviet Union in drawing a parallel to President Donald Trump’s recent actions toward the Iran nuclear agreement entered into by his predecessor, President Barack Obama.

Trump announced Friday that he would decertify the Iran nuclear deal and increase sanctions on the country’s chief military arm.

The moves come as North Korea is once again ratcheting up its rhetoric and warning that nuclear war could come at any moment.

“Our North Korea policy is not a victim of our Iran policy. North Korea is a cautionary tale that should inform our Iran policy,” Haley said. “Leaving the Iran deal unchanged sends Kim Jong Un an unmistakable message that the United States can be bought with a bad deal that does not end the threat of its nuclear missile program, a deal just like the Iran deal.”

She recalled Presidents George H.W. Bush, Bill Clinton, and George W. Bush making unilateral concessions and monetary payments, but getting little in return from North Korea besides broken promises, as the regime in Pyongyang increased its nuclear arsenal. She warned that the Iran deal, if not properly enforced, would go down the same path.

Haley said Tehran could be in technical compliance with Obama’s Iran deal, but Iran is still moving forward with a ballistic missile program and seeking to block inspections of military sites. Saying Iran is in compliance with details, the former South Carolina governor said, misses the forest for the trees, “and this is a dangerous forest.”

Trump did not withdraw the United States from the Joint Comprehensive Plan of Action, but rather proposed the U.S. and allies fix the deal and make it more effective. He called on Congress and U.S. allies to take a tougher stance against Iran and to demand more access by international nuclear inspectors.

The Trump administration contends Iran has not complied with the spirit of the deal. Trump is punting the issue to Congress under the Iran Nuclear Agreement Review Act, which authorizes 60 days to determine if the U.S. should reimpose sanctions.

The Trump administration has a four-part strategy: working with allies to combat the Islamist regime’s support for terrorism in the Middle East; placing additional non-nuclear-related sanctions on the regime’s Islamic Revolutionary Guard Corps that would not violate the Joint Comprehensive Plan; addressing the proliferation of missiles and weapons; and denying Tehran any path to a nuclear weapon.

Haley said Reagan demonstrated to the Soviet Union that he had the “strength and skill to drive a hard bargain” and produced an effective arms control treaty by the end of his presidency.

“Reagan continued negotiating with the Soviets, but did so from a position of strength,” Haley said. “The principle that Reagan understood was that the U.S. showing strength and leadership made the world safer.”