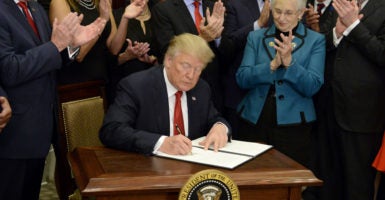 President Donald Trump signed a new executive order on Thursday that moves health care a step in the right direction.

The executive order instructs the secretaries of treasury, labor, and health and human services to propose regulatory changes that would increase choice and competition in health insurance.

This is the right course of action. In the absence of congressional action to address Obamacare’s damage, Trump is right to seek ways within his power to help those hurt by Obamacare’s skyrocketing premiums and the reduced access to quality plans.

First, small business employees and the self-employed are most hurt by Obamacare. The percentage of workers at small firms receiving coverage through their employer has declined from nearly half in 2010 to about one-third in 2017. They face skyrocketing premiums and reduced choice in plans.

One challenge small businesses face is that, under current interpretations of a federal employee benefit law, they are limited in their ability to band together and secure coverage similar to plans offered by larger employers.

Obamacare exacerbated that problem by imposing costly new benefit mandates on small employer plans, but not on large employer plans. Thus, Trump is right to ask the Department of Labor to help by exploring ways to update this interpretation.

A change of this sort could allow small businesses and the self-employed to escape Obamacare’s costly benefit mandates and access new options run by associations that they have a stake in.

It could also help more small employers offer coverage to their workers. Newly enrolled individuals could save money—up to 20 to 50 percent on the cost of their insurance—by taking advantage of the tax break for employer-provided health insurance.

These plans are often one-third of the cost of the cheapest Obamacare plans, yet typically feature broad provider networks and high coverage limits. That makes it harder than it should be for people between jobs to access a low-cost insurance plan.

As a result, people between jobs face suboptimal choices such as buying Obamacare’s heavily regulated and expensive plans, or going on Medicaid.

To address this, Trump rightly asks the departments of the Treasury, Labor, and Health and Human Services to consider reversing Obama’s decision.

Third, the Obama administration issued regulations limiting the ability of businesses to offer their employees coverage through “Health Reimbursement Arrangements,” in order to force such plans to comply with Obamacare’s standardized, one-size-fits-all benefit design.

Yet the whole point of those plans is to give businesses and workers a tool for customizing their health benefits according to their own needs and preferences.

Thus, Trump has rightly asked the departments of the Treasury, Labor, and Health and Human Services to explore ways to revise those regulations so that employers and workers have more flexibility and choices for health benefits.

While Trump’s executive order on health care is a step in the right direction, he needs Congress to get back to work in order to more fully improve our health system. The administration can only do so much, as it has to work within the confines of exiting law, including Obamacare.

For instance, the administration likely has sufficient authority to revise the regulations on health reimbursement arrangements so that employers have new options to give workers tax-free contributions to buy the individual market coverage of their choice.

But the potential benefits of that policy change will remain largely unrealized, so long as the law prevents insurers from offering anything other than Obamacare’s limited menu of standardized, overregulated, overpriced individual market plans.

Thus, Congress needs to do its job, fully undo Obamacare’s damage, and offer broader relief to all Americans struggling with rising premium costs and reduced choice of plans.