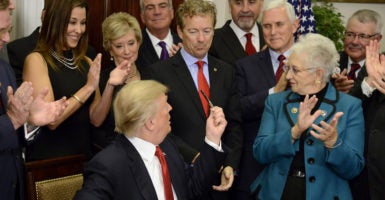 Unable so far to achieve even a partial rollback of Obamacare from Congress, President Donald Trump signed an executive order Thursday that could make it easier for some consumers to buy insurance across state lines—potentially increasing competition.

“Insurance companies will be fighting to get every single person signed up … and you’ll get such low prices,” @POTUS says.

Sen. Rand Paul, R-Ky., who opposed the recent Graham-Cassidy measure in the Senate to roll back Obamacare, heralded the executive order during the White House ceremony.

“President Trump is doing what I believe is the biggest free-market reform of health care in a generation. This reform, if it works and goes as planned, will allow millions of people to get insurance across state lines at an inexpensive price,” Paul said, speaking before the president did.

Trump, during his remarks, acknowledged the significance of the support from Paul, with whom he sparred during the 2016 Republican presidential primary season.

“I can say, when you get Rand Paul on your side, it has to be positive, that I can tell you. Boy,” Trump said to laughter and applause. “I was just saying as he’s getting up and saying all these wonderful things about what we’re going to be announcing, I said, ‘Boy, that’s pretty unusual. I’m very impressed.’”

Trump nearly walked away after his remarks before Vice President Mike Pence reminded him he still had to sign the order. After signing it, Trump gave the pen to Paul.

Trump did take a veiled swipe at congressional inaction on dismantling Obamacare when he noted: “For a long period of time since I’ve started running and since I became president of the United States, I just keep hearing ‘Repeal and replace, repeal and replace.’ Well, we’re starting that process, and we’re starting it in a very positive manner.”

After two tries, the House passed a measure to replace the Affordable Care Act, popularly known as Obamacare, but the Senate failed twice to get legislation to a conference committee after a few Republican defections—one of whom was Paul the last time.

“He is trying to give relief to Americans, through small group coverage, who are looking at horrendous premium increases,” Robert Moffit, a senior fellow in health policy at The Heritage Foundation and a former deputy assistant secretary for the Department of Health and Human Services, said.

“There has to be an option for people that don’t get subsidies or we will see a reversal in the gains from Obamacare,” Moffit said. “There will be more uninsured.”

The Senate first tried to passed a “skinny repeal” of Obamacare that failed in a floor vote after three Republican defections: Susan Collins of Maine, John McCain of Arizona, and Lisa Murkowski of Alaska.

A subsequent bill sponsored by Sens. Lindsey Graham, R-S.C., and Bill Cassidy, R-La., focused on block-granting health care dollars to the states but never made it to a floor vote after Collins, McCain, and Paul all came out against it. By that point, Murkowski had said that she disliked the process.

“You look at what’s happening with the premiums and the increases of 100 percent and 120 percent, and even in one case, Alaska, over 200 percent and now, every congressional Democrat has blocked the effort to save Americans from Obamacare, along with a very small, frankly, handful of Republicans—three,” Trump said, adding:

Premiums have gone skyrocketing, [and] today, one-third of all the counties in America have only a single insurer selling coverage on an exchange, and next year it looks like nearly half of all counties in our country—think of that—all of the counties, one half will have only one insurer, and many will have none.