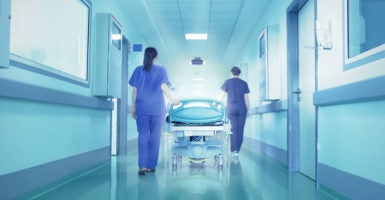 Insurance premiums across the country are set to spike in 2018 due to market uncertainty and rigid coverage requirements. (Photo: iStock Photos)

Two weeks ago, my husband and I received yet another cancellation notice for our private, individual health insurance coverage. It’s our fourth Obamacare-induced obituary in four years.

Our first death notice, from Anthem Blue Cross and Blue Shield, arrived in the fall of 2013. The insurer informed us that because of “changes from health care reform (also called the Affordable Care Act or ACA),” our plan no longer met the federal government’s requirements.

Never mind our needs and desires as consumers who were quite satisfied with a high-deductible preferred provider organization that included a wide network of doctors for ourselves and our two children.

Our second death knell, from Rocky Mountain Health Plans, tolled in August 2015. That notice signaled the end of a plan we didn’t want in the first place that didn’t cover our kids’ dental care and wasn’t accepted at our local urgent care clinic.

The insurer pulled out of the individual market in all but one county in Colorado, following the complete withdrawal from that sector by Humana and UnitedHealthcare.

Our third “notice of plan discontinuation,” again from Anthem, informed us that the insurer would “no longer offer your current health plan in the state of Colorado” in August 2016.

Now, here we are barely a year later: Deja screwed times four. Our current plan will be discontinued on Jan. 1, 2018.

“But don’t worry,” Bright Health’s eulogy writer chirped, “we have similar plans to address your needs.”

Riiiiight. Where have I heard those pie-in-the-sky promises before? Oh, yeah. Straight out of the socialized medicine Trojan horse’s mouth.

Is pathological lying covered under the Affordable Care Act?

Speaking of Affordable Care Act whoppers, so much for “affordable.” Our current deductible is $6,550 per person—$13,100 for our family of four. Assuming we can find a new plan at the bottom of the individual market barrel, our current monthly premium, $944.86, will rise to more than $1,300 a month.

“What’s taking place is a market correction; the free market is at work,” says Colorado’s state insurance commissioner, Marguerite Salazar. “[T]his could be an indication that there were too many options for the market to support.”

This presumptuous central planner called federal intervention to eliminate “too many” options for consumers the free market at work. Yes, friends, the Rocky Mountain High is real.

This isn’t a “market correction.” It’s a government catastrophe.

Premiums for individual health plans in Virginia are set to skyrocket nearly 60 percent in 2018. In New Hampshire, those rates will rise 52 percent.

When I first called attention to the cancellation notice tsunami in 2013, liberal Mother Jones magazine sneered that the phenomenon was “phony.” And they’re still denying the Obamacare death spiral. Liberal Vox Media recently called the crisis “a lie.”

I don’t have enough four-letter words for these propagandists. There are an estimated 450,000 consumers like us in Colorado and 17 million of us nationwide—small business owners, independent contractors, and others who don’t get their plans through group coverage, big companies, or government employers.

The costs, headaches, and disruption in our lives caused by Obamacare’s meddling meddlers are real and massive.

But we’re puzzles to corporate media journalists who’ve never had to meet a payroll and don’t even know what is the individual market.

We’re pariahs to social justice health care activists and Democrats who want us to just shut up and subsidize everyone else’s insurance.

And we’re expendables to establishment Republicans who hoovered up campaign donations on the empty promise to repeal Obamacare—and now consider amnesty for immigrants here illegally and gun control higher legislative priorities than keeping their damned word.

We’re the canaries in the Obamacare coal mine. Ignore us at your peril, America. You’re next.