What Trump Told Congress He Wants to See on Immigration 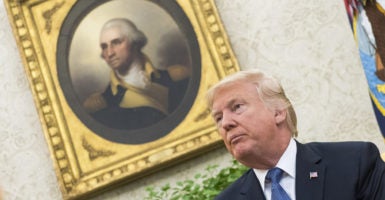 At this point, Democrats would be blamed if an amnesty isn’t enacted, said Mark Krikorian, executive director of the Center for Immigration Studies, a pro-border security think tank.

“It’s the opening bid, the president is going to aim high, but I’m skeptical of whether Democrats will negotiate and come up with a counteroffer,” Krikorian told The Daily Signal. “They just expected Trump to sign an amnesty bill. The ball is now in the Democrats’ court.”

Trump is working with Congress on a legislative fix to the Obama-era executive action granting temporary legal status to illegal immigrants who came to the country as children, the policy known as the Deferred Action for Childhood Arrivals, or DACA.

Trump’s letter outlines 70 principles for any immigration legislation. This includes the completion of a border wall, which was the cornerstone of his 2016 presidential campaign. However, he indicated that it would not be part of the deal with Congress on codifying the Obama-era DACA policy.

Trump asked the administration to conduct a review and provide recommendations.

“Rather than asking what policies are supported by special interests, we asked America’s law enforcement professionals to identify reforms that are vital to protect the national interest,” Trump said in the letter. “In response, they identified dangerous loopholes, outdated laws, and easily exploited vulnerabilities in our immigration system—current policies that are harming our country and our communities.”

Trump’s principles on immigration—presented in a letter to Congress Sunday—are solid enough, but this still poses the problem of trading amnesty up front for the promise of stronger enforcement maybe later down the road, said David Inserra, a homeland security policy analyst with The Heritage Foundation.

“Amnesty is one and done, but enforcement measures still require annual appropriation, annual policy, and adjustments to the policy,” Inserra told The Daily Signal. “We should enforce our laws first and foremost.”

Trump’s letter to Congress calls for closing loopholes on illegal immigrants to make deportations easier, and to fund another 370 immigration judges to expedite court cases.

Dismantling the #CleanPowerPlan is an assault on our sacred obligation to preserve God’s creation for the future. https://t.co/DLDh7AdQRP

Trump also calls for cracking down on visa overstays, which the letter says account for 40 percent of all illegal immigration.

“The administration therefore proposes strengthening the removal processes for those who overstay or otherwise violate the terms of their visas, and implementing measures to prevent future visa overstays which may account for a growing percentage of illegal immigration,” the letter says.

The proposal would also debar any company that doesn’t use E-Verify from qualifying for federal contracts. E-Verify is an electronic system for employers to determine the legal status of employees.

“President Trump has gone back on a promise to support a clean bill and instead is now seeking to sabotage legislation aimed at giving these young people a chance for a stable and prosperous future by loading the bill with unpopular and controversial measures,” said Janet Murguía, president of UnidosUS, in a statement. “Sending these so-called ‘conditions’ to Congress is simply a way to stop the bipartisan effort behind a clean DREAM bill.”