‘Feminist Economics’: Coming to a College Campus Near You 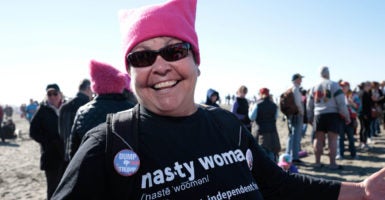 If you haven’t yet heard of “feminist economics,” get ready, because liberal economists, policy organizations, and activist groups are pushing the concept as the next battleground for women’s rights.

Because condemning catcalling and “toxic masculinity” in cultural terms isn’t enough, they’re now targeting government policies and institutions they contend are oppressive and discriminatory toward women.

In order to level the playing field, feminist economists are calling for a massive expansion in government benefits, from universal child care to universal health care plans that cover abortion, birth control, sterilization, fertility, and surrogacy.

What Is ‘Feminist Economics’?

In order to understand “feminist economics,” you must first understand what those on the left side of the aisle call the “economics of misogyny.”

The economics of misogyny describes “how these anti-woman beliefs are deeply ingrained in economic theory and policy in such a way that devalues women’s contributions and limits women’s capabilities and opportunities,” explained Kate Bahn in an article for the liberal Center for American Progress. “[D]espite the central role of women in the economy throughout history, our economic policy and government institutions often treat women’s diverse needs and capabilities as an afterthought to ‘real issues’ in the ‘real economy.’”

The topic was discussed at length last month at a Center for American Progress event, “The Economics of Misogyny.” Scholars and economists gathered from a handful of top colleges and universities from around the nation for panel discussions on “The Intersection of the Family and the Labor Market” and “The Economics of Bodily Autonomy.”

One of the goals behind feminist economics is to put a monetary dollar to the cost of the work women traditionally do for free, such as child, elderly, or sickness care. By ignoring the monetary value of this work, they suggest, women themselves are being undervalued and held back.

How It’s Happening and What to Do About It

Discrimination against women in the labor market has a long history, explained Nina Banks, an associate professor of economics at Bucknell University in Lewisburg, Pennsylvania. And central to it is the concept of intersectionality—the idea that categories such as race, class, immigration status, and gender are all connected. An African-American woman, for example, is more disadvantaged than a white woman.

Intersectionality explains the “grand narrative about work that is framed around the labor market experiences of white women, primarily white, married women,” she said. “It’s a white-centered bias when we look at these experiences. That’s a problem.”

Building on this idea, Michelle Holder, an assistant professor of economics at John Jay College of the City University of New York, suggested that government policies that encourage marriage should be abolished, because the black community has significantly lower marriage rates than white Americans. (According to a study on marriage patterns performed by the National Institutes of Health, black women, compared with white and Hispanic women, “marry later in life, are less likely to marry at all, and have higher rates of marital instability.”)

“Most African-American women aren’t a part of a couple, [so] I think it’s problematic to privilege couples, whether they are same-sex or different-sex couples,” Holder said. “I think we need to redefine unpaid work around these different kinds of family structures.”

Conservatives generally disagree and have long supported government policies that encourage—or “privilege”—marriage, because couples who get married prior to having children are far more likely to flourish financially.

Panelists didn’t just want to remove policies that encourage marriage, however. They also proposed subsidizing “care labor”; meaning, instead of working with your husband, wife, or the surrounding community to raise children and take care of sick or elderly family members, the state does it for you.

“Women doing unpaid care work creates particularly difficulties for women in the economy,” said Randy Albelda, an economics professor at the University of Massachusetts at Boston and director of the College of Liberal Arts.

In order to address this “discrimination and occupational segregation,” Albelda proposed helping families “by providing the care work through a collectivized way that most countries do.” For example, she said:

Universal education and care, which I actually think would probably be the most important policy for all women, particularly low-income women in this country … It’s sort of a no-brainer … . If economists were really concerned about efficiency … they would be on top of this in a flash, because it is such a waste of all sorts of things. It increases our poverty rate. It reduces women’s labor force participation. It generates more inequality. Early education and care is one of the biggest engines of inequality in the United States.

Judith Warner, a senior fellow at the Center for American Progress, floated the idea that the hours a mother spends caring for her children or family could be factored “into someone’s Social Security payments down the line.”

“That’s a great point. It’s not just symbolic value; it’s actual production,” responded Joyce Jacobsen, an economics professor at Wesleyan University in Middletown, Connecticut. “We used to talk about strikes of household workers—that you would actually lose a huge amount of production if … people just refused to take care of their children, refused to take care of their sick parents, refused to do housework. It would be chaos. It’s not even just symbolic.

“We can come up with actual dollar amounts for the loss of productivity, and I think that’s, again, where economists can be of great help in pointing out that there are methods to do those calculations.”

‘The Economics of Bodily Autonomy’

It’s not just care work that feminist economics strives to monetize. They contend that “bodily autonomy” also plays a crucial role in women’s ability to fully engage in the economy.

“Targeted regulation for abortion providers, mandatory waiting periods, limitations on late-term abortions, all these things are happening in a much bigger group of states,” said Adriana Kugler, a professor at the McCourt School of Public Policy at Georgetown University. “And actually, we find, really limit labor market opportunities and economic opportunities for women.”

“The abortion industry not interested in abortion clinic regulations that are crafted to protect women’s health and safety, or informed consent requirements that include scientifically accurate information about the unborn child and information about the risks and alternatives to abortion,” said Melanie Israel, a research associate at The Heritage Foundation focused on the issue of life. “And the abortion industry is certainly not interested in a health care system that empowers women to obtain a plan that both meets their needs and reflects their religious and moral values.”

Furthermore, Israel said, “Telling women that the path to success requires destroying the life inside them presents a false ‘choice.’”

The reality is, ensuring that both mom and baby are able to thrive is not an either/or endeavor. That’s why across the country, the pro-life community, and life-affirming pregnancy resource centers strive so hard to offer women services, education, supplies, counseling, and compassionate options to women experiencing a tough pregnancy.

Another area where economics plays into bodily autonomy, the panelists argued, is the national debate over transgender individuals and public restrooms.

Lee Badgett, an economics professor at the University of Massachusetts at Amherst, cited the so-called “bathroom bill” in North Carolina, which mandated people use bathrooms and locker rooms in schools, public universities, and other government buildings based on the gender listed on their birth certificates, as an example of a government policy regulating bodily autonomy.

These regulations, she argued, can hold women—and all people, for that matter—back.

“There was an exodus of businesses who were thinking of investing in Charlotte, and the other areas of North Carolina … so who’s hurt the most? It was actually, probably … hereosexual people. They’re the ones who would mainly have had those jobs, and they’re not having them. So I think it’s a way … we all have an incentive to have an inclusive society for everybody.”

An “inclusive society,” according to liberal groups such as the Center for American Progress, takes the form of government mandating society to use certain pronouns, teach transgender ideology to children, and open public restrooms to people based on their gender identity. But if transgender-friendly bathrooms made good economic sense, one might think there’d be no need for a law forcing businesses—public or private—to adopt these policies.

In North Carolina, however, it wasn’t just the government that got involved. Big businesses and special-interest groups stepped in, attempting to use their influence and economic power to impose their liberal values via bullying and boycotts.

Ryan T. Anderson, a Heritage Foundation senior fellow and author of “When Harry Became Sally: Responding to the Transgender Moment,” calls this “textbook cultural cronyism” at “the expense of the common good.”

The Future of ‘Feminist Economics’

The role of “feminist economics” in our political conversation is still young. And with Democrats arguing Ivanka Trump’s paid family leave proposal doesn’t go far enough, it’s likely to continue. As the Center for American Progress put it: “Feminist economics provides a starting point to developing a broader understanding of how women’s varied lives and complex needs interact with the economy.”

At its heart is one idea: Women are better off with government as our husbands, fathers, caretakers, and moral arbiters. Anything short is discriminatory against women.