This Key Change Will Bring Money Pouring Back Into the US 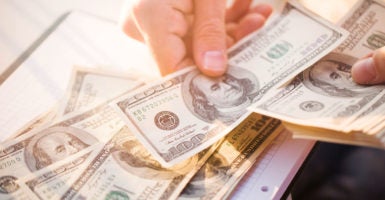 A territorial tax system would allow profits made overseas by U.S. companies to be returned to the U.S. without being double-taxed. (Photo: iStock Photos)

He’s right—and one of the worst aspects of our broken code is the “worldwide” system of taxation.

Under current tax law, U.S. businesses are expected to pay the same amount of taxes on income they earn overseas as they would in the U.S. Of course, these same companies are also paying taxes in those foreign countries, which means their profits are being double-taxed.

Let’s look at an example.

Allan owns a company that sells baseball caps. Last year, he made $50,000 of profits in the United Kingdom. There, he has to pay the British government a 19 percent corporate tax, amounting to $9,500.

Allan wants to bring that money back to the United States. But to do so, he has to pay the U.S. government another 35 percent of those profits (that’s the current corporate tax rate), which means dishing out another $17,500.

You can see why Allan has an incentive to keep his $40,500 in profits in Britain, as opposed to reinvesting in his business back home. And countless other companies feel that same incentive.

That’s bad for investment in America and for economic growth, and it’s why the new GOP tax plan has made a significant stride by proposing a “territorial tax system.”

The territorial system would allow all foreign subsidiaries to bring their earnings back to the U.S. with a 100 percent deduction. In other words, overseas profits made by U.S.-based companies will no longer be double-taxed because the U.S. government will no longer assess a tax when those profits are brought back to our shores to be spent or invested.

Under a territorial tax system, he would still have to pay a $9,500 tax on his $50,000 of income to Great Britain, but that’s all. He could bring the rest of his profits home to the U.S. without paying any taxes on them because they weren’t made within the U.S.

Under the territorial system, Allan gets to keep $40,500 in profits.

The U.S. already has the highest corporate tax rate in the developed world. U.S. companies are currently at a disadvantage when competing with other companies internationally because of the high tax burden.

A territorial system will encourage foreign business investment here in America and help bring back more than $2.6 trillion in profits currently locked out of the U.S. by our broken and outdated tax system.

Establishing a territorial tax would also encourage companies to stay in the U.S. rather than merging with international companies to avoid the tax burden. Only 20 percent of developed nations have worldwide tax systems, while the rest have territorial systems, putting the U.S. in the minority of the developed world. Heritage Foundation policy analyst Adam Michel gives some great examples:

Reacting to both the high U.S. corporate income tax rate and worldwide taxation, U.S. firms are pressured to merge with foreign competitors and move their new joint headquarters overseas to avoid the U.S. tax system. Prominent examples include Anheuser-Busch’s acquisition by Belgian brewer InBev, and Burger King’s buyout of Canadian Tim Hortons. U.S.-foreign mergers always reincorporate outside the U.S. Even if the merger is not explicitly tax motivated, the decision to not headquarter in the U.S. certainly is tax motivated.

American companies shouldn’t get special handouts to succeed in the marketplace. But they also shouldn’t have to start from a disadvantage to compete with international companies.

The answer is to reform our tax code and to adopt a territorial system for the 21st century.