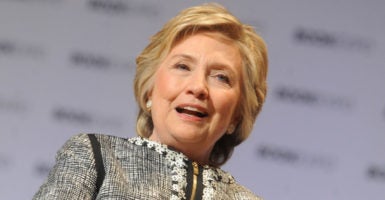 Hillary Clinton was among the chorus of voices calling for more gun control after the recent massacre in Las Vegas. (Photo: Dennis Van Tine/LFI/Avalon.red /Newscom)

Enough is enough. It’s epidemic. It’s dangerous. And the time has come to demand its end.

In the aftermath of the horrific massacre in Las Vegas, America needs fallacy control. Yes, we must declare war on fallaciousness. Now more than ever, the nation is suffering from an outbreak of illogical thinking.

In response to senseless violence, clearheaded citizens deserve a safe space from the 24/7 barrage of rhetorical nonsense. Let’s break down the collective cognitive breakdown.

Empty talking points don’t become persuasive arguments when uttered by Hollywood stars. But in the bizarre land of the celebrity cult, late-night comedian Jimmy Kimmel has been suddenly anointed “America’s conscience” and “voice of reason.”

Kimmel railed “intensely” on TV Monday night against politicians doing “nothing” to stop mass gun violence. Sobbing and emotional, he insisted, “there’s a lot of things we can do about it.”

Yet, Kimmel acknowledged that Mandalay Bay gunman Stephen Paddock had passed multiple, mandated background checks and had no criminal history.

Moreover, Paddock bought his guns legally from Nevada and Utah gun shops subject to a thicket of local, state, and federal rules—and reportedly carried 23 of his weapons into a casino/hotel that already operates as a gun-free zone.

Federal studies show that a measly 1 to 3 percent of all guns are purchased at gun shows, but that didn’t stop Kimmel from tossing around non sequiturs attacking the “gun show loophole.” It’s a mythical exemption in federal law for private weapons sales at gun shows or online intended to drum up hysteria about unregulated gun sales.

In reality, firearms purchased through federally licensed firearms dealers at gun shops, shows, garage sales, or anywhere else are subject to all the usual checks and restrictions.

Only a narrow category of same-state transactions between private individuals not engaged in the commercial business of selling firearms (family members or collectors, for example) are unaffected by those regulations.

There is zero empirical evidence that banning these types of transactions would do anything to prevent gun crimes or mass shootings.

But who needs evidence when Jimmy Kimmel is bawling on stage “intensely”? The tears of a clown outweigh the sobriety of facts.

Actor Billy Baldwin unloaded a fallacy two-fer with his assertion that “the overwhelming majority of Dems, Reps & NRA members endorse #GunSafety,” so “how can we let the #NRA hold us hostage like this? #NRATerrorists.”

The overwhelming majority of Dems, Reps & NRA members endorse #GunSafety.. how can we let the #NRA hold us hostage like this?#NRATerrorists

Claiming that an “overwhelming majority” of people agree with you doesn’t make your argument sound. Nor does citing polls showing support for “gun show loopholes” that those surveyed don’t fully understand.

Nor does attacking the character of your political opponents and hashtag-smearing them as “NRATerrorists” for holding political viewpoints different than your own.

Democrat Rep. Ted Lieu of California illustrated a similar diversionary tactic by waving the red herring of a “gun silencer bill” and demanding that GOP “COWARDS” vote against deregulating such suppressors.

Hillary Clinton also demagogued the issue, ghoulishly tweeting: “Imagine the deaths if the shooter had a silencer, which the NRA wants to make easier to get.”

The crowd fled at the sound of gunshots.

Imagine the deaths if the shooter had a silencer, which the NRA wants to make easier to get.

Her running mate and Virginia Sen. Tim Kaine parroted the propaganda, claiming that Paddock “was only stopped because he didn’t have a silencer on his firearm, and the sound drew people to the place where he was ultimately stopped.”

Police, however, took 72 minutes to locate Paddock; it was the sound of hotel fire alarms set off by all the gun smoke that led them to the shooter. But let’s not let pesky facts in the way.

Think of the Children

Invoking kids to support one’s public policy preferences is not an argument. It’s a timeworn appeal to emotion. Without it, however, gun control advocates are all out of ammunition.

“We as a society owe it to our children” to pass “common sense” gun control, New Orleans Saints coach Sean Payton pleaded.

“Thoughts & prayers are NOT enough. Not when more moms & dads will bury kids this week, & more sons & daughters will grow up without parents,” Sen. Elizabeth Warren, D-Mass., fumed on Twitter.

Thoughts & prayers are NOT enough. Not when more moms & dads will bury kids this week, & more sons & daughters will grow up without parents.

And actor Boris Kodjoe tweeted: “My 10 year old asked me how the shooter was able to get his machine gun. I told him that pretty much anyone in the US can. ‘But why daddy’?”

My 10 year old asked me how the shooter was able to get his machine gun. I told him that pretty much anyone in the US can. ‘But why daddy’?

Too bad Kodjoe’s kid will never know that daddy didn’t tell him the truth about fully automatic firearms (aka “machine guns”), which have been effectively banned from private civilian ownership in the U.S. as a result of federal gun legislation dating back to 1934.

Nor will the children of the “Think about the children!” brigade be taught the truth about defensive gun use or Second Amendment history and jurisprudence.