Failure to Adequately Fund Our Military Puts America at Risk 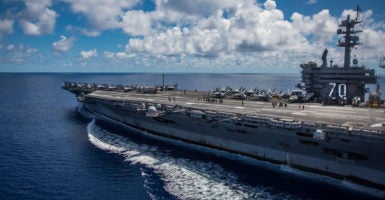 The Navy's battle fleet is the smallest it has ever been since before World War I. (Photo: Atlas Photo Archive/U.S. Navy/Z A/Avalon.red/Newscom)

Arguably the federal government’s first obligation to Americans is to keep us safe from foreign attack and to defend our vital national interests wherever they are threatened.

Alarmingly, our government is on the verge of failing in this core responsibility. Our military is minimally ready, rapidly aging, and has so shrunk in size that even senior military leaders question its ability to adequately meet its national security obligations.

This is a disservice to Americans in general and, most especially, to those who are tasked with carrying out the duty of protecting our nation.

Two weeks ago, voicing his concerns about the military’s condition and the impact that restricted funding is having on America’s security, Secretary of Defense James Mattis was quite blunt:

[N]othing has done more damage to the readiness of our armed forces than the continuing resolutions that stop us from taking initiative, than the lack of budgetary predictability. … I bring this up because if we don’t get budgetary predictability, if we don’t remove the defense caps, then we’re questioning whether or not America has the ability to survive. It’s that simple.

Gen. Daniel B. Allyn, until recently the vice chief of staff of the Army, has testified that only “one-third of our BCTs [brigade combat teams], one-fourth of our combat aviation brigades, and half of our division headquarters” are considered ready.

Currently, of the Army’s 31 brigade combat teams only three would be available to immediately deploy to a conflict.

The Air Force is 24 percent short of the fighters it needs, and is short 1,000 pilots and over 3,000 maintainers. Only four of its 32 combat-coded squadrons are ready to execute all wartime missions.

Prior to 1991, the Air Force purchased more than 500 aircraft a year to offset platforms aging out of its inventory. Since then, it has averaged fewer than 100 per year.

The Marine Corps “is insufficiently manned, trained, and equipped across the depth of the force to operate in an ever-evolving operational environment,” according to Gen. Glenn Walters, assistant commandant of the Marine Corps. This past December, the Corps reported that less than half of its aviation platforms were considered flyable.

As for our Navy, well, it has two-thirds the ships it did near the end of the Cold War, its battle fleet being the smallest since before World War I. The recent set of ship collisions in the Western Pacific imply severe problems in basic ship-handling skills.

How is it possible that the military that won World War II and successfully kept World War III from happening—achieving peace through strength—has decayed to such a point, even while it has sustained operations for 16 years in distant theaters?

Notably, because our government has failed to recognize the difference between its obligation to “provide for the common defense” and its desire to squander taxpayer dollars on “projects of choice” rather than of necessity or responsibility.

The government has failed, and continues to fail in allocating resources commensurate with America’s security interests.

Through our Index of U.S. Military Strength, The Heritage Foundation has committed to informing our citizenry and government about the status of threats to America and the ability of our military to successfully defend our country when called upon to do so.

Threats are growing at the same time that our military is in decline. Unless this imbalance is corrected, and soon, Mattis’ fear may be realized.