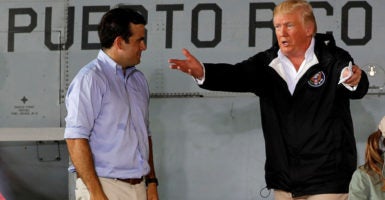 Despite granting three waivers from a 1920 shipbuilding law to hurricane-ravaged areas, President Donald Trump isn’t considering a permanent repeal of what’s known as the Jones Act, the White House says.

Republican Sens. John McCain of Arizona and Mike Lee of Utah have proposed a permanent exemption for Puerto Rico from the law, formally known as the Merchant Marine Act of 1920. The law requires shipments between two U.S. ports to be on U.S.-built, U.S.-owned, and U.S.-manned vessels.

“I don’t think that’s something that’s necessary at this time,” White House press secretary Sarah Huckabee Sanders told The Daily Signal when asked about a permanent exemption for Puerto Rico, which was devastated by Hurricane Maria.

“If we deemed that it was, we could have that discussion then. But certainly [it’s] something that we don’t feel like is necessary today, so I wouldn’t imagine that would be something needed,” Sanders said.

The Trump administration has granted temporary waivers to the law after recent hurricanes that struck Texas, Florida, and most recently Puerto Rico, where he visited Tuesday to meet with government officials, victims, and first responders. The waivers were intended to facilitate access of goods and materials into and out of the hurricane-ravaged areas.

Even before Hurricane Maria, critics of the Jones Act said the law raises the cost of doing business on Puerto Rico. It also is harmful to the states of Alaska and Hawaii in transporting goods. Further, experts note that Northeastern states are more likely to get oil from foreign sources, rather than from domestic sources, because of the law.

McCain and Lee say their legislation would provide a long-term economic boost for the Caribbean island that is a U.S. territory.

“The Jones Act is just another example of a federal regulation that harms American consumers, gives foreign corporations an edge over American businesses, and makes disaster response harder,” Lee, a conservative, said in a statement last week about the bill. “It is far past time to repeal it.”

McCain, a moderate, has been a longtime opponent of the law, first introducing legislation for full repeal in 1998, and introducing subsequent repeal bills since then.

“Our legislation would permanently exempt Puerto Rico from the Jones Act, an antiquated, protectionist law that has driven up costs and crippled Puerto Rico’s economy,” McCain said in a statement. “For years, I have fought to fully repeal the Jones Act, which has long outlived its purpose to the benefit of special interests. It’s time for Congress to take action, end this injustice, and help our fellow citizens in this time of need.”

The American Maritime Partnership, the U.S. shipbuilders lobby, contends that lawmakers are making false assumptions about the law’s impact, and insists that it doesn’t make products more expensive in Puerto Rico and that it helps the American economy.