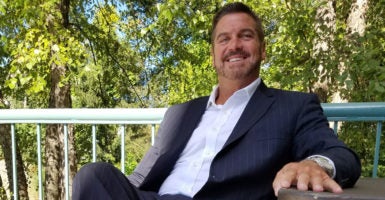 GREENVILLE, Delaware—When he appeared on the CBS reality television series “Undercover Boss” in October 2013, Anthony Wedo worked alongside cashiers, servers, grill cooks, dishwashers, and managers to find out what was happening inside his company.

Wedo was president and CEO of Buffets Inc., which operated hundreds of buffet-style restaurants under the names Old Country Buffet and HomeTown Buffet and had 18,000 employees in 35 states. He sold the company in 2015 after implementing workplace changes based in part on his undercover experience.

Now he wants to be part of a bigger change by getting behind right-to-work legislation about to be proposed in one of the three counties in his home state of Delaware.

Elected officials in Sussex County, Delaware, were expected to make a public announcement on the right-to-work bill as early as Tuesday.

If such a timetable holds, the five-member Sussex County Council could vote on the proposal at its meeting Oct. 10, with three votes needed to pass it. All of the council members are Republicans.

The effort is proceeding in tandem with a similar proposal in Sandoval County, New Mexico, where the first of two public hearings before the county commission is scheduled for Thursday.

Wedo, now chairman, president, and CEO of Greenville-based Premier Restaurant Group, is widely known as a “turnaround CEO” with a talent for reinventing and reinvigorating brands that have not realized their full potential.

He has set his sights on right to work as an audacious new challenge in his home state, which he says is “strategically located with an awesome brand that has been left unattended by unenlightened leaders.”

Although Delaware has experienced economic decline in recent years, Wedo said, the state “can be reinvigorated through the free enterprise system and with the right mix of incentives to attract new business.”

That’s why this “undercover boss” is supporting the Sussex County proposal.

“I’m a data-driven person and the data on right to work is overwhelming,” Wedo told The Daily Signal in an interview. “Those states and those localities that are right to work have more jobs, more business opportunity, and more economic opportunity.”

Kentucky stands out because localities there established the legal right to move forward with their own ordinances in the absence of state-level action. In fall 2014, Warren County, Kentucky, passed right-to-work legislation and 11 other counties followed its lead.

After Republicans took control of the Kentucky House of Representatives this year for the first time since 1921, the state Legislature passed a measure making all of Kentucky right to work. Gov. Matt Bevin, a Republican, signed the bill into law.

But it is action at the county level that continues to have ramifications across state lines, as right to work is viewed as a vehicle for economic revival.

That’s because a ruling last year by the 6th U.S. Circuit Court of Appeals, which covers Kentucky, Michigan, Tennessee, and Ohio, upheld the right of counties to pass their own such laws under the National Labor Relations Act, the federal law covering employers, employees, and labor unions.

Labor unions, and possibly the Delaware attorney general, will file suit against Sussex County if it proceeds, said Charles Daniel, president of the Caesar Rodney Institute, a Delaware-based free-market think tank that is part of the State Policy Network.

Daniel told The Daily Signal that such court cases could work their way up to the 3rd Circuit Court of Appeals, which covers Delaware, New Jersey, Pennsylvania, and the Virgin Islands.

Even so, Daniel said, he takes heart from the 6th Circuit’s unanimous ruling in favor of local action.

“Our attorneys have looked very carefully at [Delaware’s] Home Rule Act, and it does not say anything that would prohibit right to work,” Daniel said. “Counties and towns in the state can have a higher minimum wage than either the state or the federal government under Home Rule, and the same principle can apply here [in localities] with right to work.”

State legislatures have the ability to adopt Home Rule statutes that delegate significant authority to counties and other localities. In Kentucky, counties argued that Home Rule provided them with the power to pass local right-to-work laws.

If the Sussex County Council were to approve a right-to-work bill Oct. 10, the next step would be for the county zoning board to review it to ensure compliance with land use plans, Daniel said.

That vote could take place Oct. 12, with three votes on the five-member zoning board required. The ordinance would have to be vetted before the zoning board to ensure “no technicalities” exist that could make it vulnerable to legal challenges, Daniel said.

If the proposal clears these hurdles, Delaware would become the first state in the Northeast and mid-Atlantic regions with an active right-to-work law on the books of a local jurisdiction before the end of October.

“No state, county, or municipality north of the Potomac River, south of Canada, east of Harpers Valley, West Virginia, and up to Cape Cod, Massachusetts, is right to work,” Daniel said, adding:

This is an area that includes 60 million people, that is 950 miles from north to south and 550 miles from east to west. What this means is that Delaware could become the only state in the entire region with a right-to-work law. We are also a state without a sales tax, and the estate tax was just abolished. I would really like to see all three counties in Delaware adopt right to work.

The other two counties are New Castle and Kent.

Rob Arlett, a member of the Sussex County Council who supports the proposed ordinance, told The Daily Signal it would be “irresponsible” for him to avoid right to work as an option for those he represents.

“What this means is that the Sussex County Council is pro-choice,” Arlett said, adding:

I believe in empowering employees and their families with the ability to decide whether or not they want to be part of a union. This is a tool we are bringing to our residents and to employers who are looking for new opportunities. There’s a great quality of life here in Delaware, some of the lowest taxes and some of the best beaches in the country. But we need to bring income opportunities here to ensure longevity for our families.

Although union leaders have been critical of right-to-work laws across the country, Arlett said he believes it is necessary for Delaware to remove mandates that discourage businesses from coming to the state.

“I support unions, but why should they have exclusivity?” the Sussex County legislator asked. “This is America and this is a free-market system, so why should someone be mandated to do something against their free will? Our citizens should have the right to work and the right to choose. With more employers coming into the state, the unions have more opportunity to market themselves to attract new clients. Right to work expands opportunities for everyone. It’s a win-win.”

The fact that local right-to-work initiatives are advancing in Delaware and New Mexico, two quite different parts of the country, demonstrates that the concept draws support from a broad cross section of Americans, Matt Patterson, executive director of the Center for Worker Freedom, told The Daily Signal.

“New Mexico and Delaware could not be more different geographically and culturally,” Patterson said. “Having both of these states pushing right to work says something about what’s bubbling up across the country.”

The proposed law in Sandoval County, New Mexico, would apply only to union contracts made after it goes into effect. It isn’t clear whether the Sussex County measure would do the same.

In both New Mexico and Delaware, the proposals would apply only to the private sector. The U.S. Supreme Court recently agreed to take up Janus v AFSCME, a case out of Illinois involving union mandates for government workers.

Since no Home Rule provision applies to Sandoval County, the New Mexico Legislature could step in to block the right-to-work effort. If so, Gov. Susana Martinez, a Republican, could veto that action.

“That’s what we would be calling on her to do, if that’s what it comes to,” Patterson said.

New Mexico is covered by the 10th Circuit Court of Appeals, but Patterson said he views the 6th Circuit ruling as “very persuasive and very significant.”

Delaware doesn’t have that problem and Wedo, the “undercover boss,” likes the idea of his state being first in the region to go right to work.

“When I appeared on the show, it was very emotional to meet these people in person and to learn of their problems and challenges,” Wedo recalled. “Everyone falls down sometimes, and I believe in a hand up, not a hand down.”

“You can’t enjoy freedom without personal responsibility,” he said. “Excessive government involvement is inverse to freedom. Those lines go in different direction. Right to work is about less government, fewer mandates, and more freedom. That’s what we need here in Delaware.”