Investigators Reluctant to Call Vegas Massacre an Act of Terror 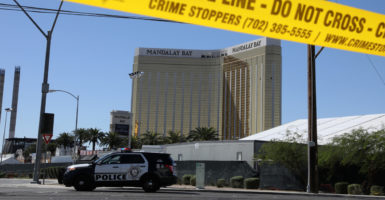 Mandalay Bay Resort and Casino, where the gunman fired from the 32nd floor, towers over the site of the Route 91 Harvest country music festival in Las Vegas. (Photo: Lucy Nicholson/Reuters/Newscom)

It’s probably too early to judge whether the massacre at a concert in Las Vegas should be characterized as an act of domestic terrorism, government officials and experts say.

The Islamic State, the terrorist group also known as ISIS, claimed credit Monday for the gunman who opened fire late Sunday night from above a country music festival on the Las Vegas Strip, killing at least 58 and wounding or injuring more than 525 before killing himself.

“That’s typical ISIS to make such a claim, they’ve done it before,” James Jay Carafano, a vice president for national security and foreign policy at The Heritage Foundation, told The Daily Signal. “ISIS is in a more desperate situation because they’ve lost their physical caliphate.”

But, Carafano noted, the Islamic State plays to a global audience.

“Americans look at this claim and laugh, but someone in Pakistan could … see it and believe it,” Carafano said.

Authorities said the shooter, identified as Stephen Craig Paddock, 64, appeared to have acted alone. However, ISIS called him a “soldier” who recently converted to Islam.

Paddock killed himself as a police SWAT team entered his 32nd-floor hotel room at the Mandalay Bay Resort and Casino, authorities said.

He reportedly had dozens of weapons in the hotel room. One is believed to be an AR-15 rifle, based on audio of rapid-fire shots.

The death toll in Las Vegas surpassed the ISIS-inspired massacre by a young gunman at the Pulse nightclub in Orlando that left 49 people dead in June 2016.

During a press conference Monday, FBI Special Agent in Charge Aaron Rouse said investigators knew of no connection between Paddock and ISIS.

Asked if it is a case of domestic terrorism, White House press secretary Sarah Huckabee Sanders said Monday that it was “premature” to characterize the attack that way.

“We’re still in a fact-finding mission,” Sanders told reporters. “This is an ongoing investigation, and it would be premature to weigh in on something like that before we have any more facts; and we’ll leave that to local law enforcement to work with, also the federal law enforcement to make those determinations.”

In remarks earlier Monday, President Donald Trump called what happened in Las Vegas “an act of evil,” but didn’t use the words “terror” or “terrorism.”

With the gunman dead, the investigation is more complicated in determining motives, Carafano said.

“Take a deep breath and wait for the investigation to run its course, and I think within a few days it will be very clear,” Carafano said.

Domestic terrorism has three qualifiers, experts say: It involves violence; the victims usually are innocent civilians; and the attacker acts with political motives.

James Alex Fields Jr., who had participated in white nationalists’ August demonstration in Charlottesville, Virginia, was charged with driving a car into a crowd of counterprotesters, killing Heather Heyer, 32, and seriously injuring others. Police didn’t charge Fields with domestic terrorism, despite apparent political motives.

Similarly, the FBI was reluctant to characterize as terrorism a gunman’s attempted massacre of Republican members of Congress at a baseball field in Alexandria, Virginia. This was so despite evidence suggesting James Hodgkinson targeted GOP lawmakers when he shot House Majority Whip Steve Scalise, R-La., and others before being killed by police.

This report was updated to put the initial number of those killed by the gunman, not including himself, at 58.