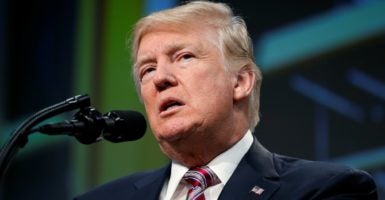 Monday is “Deregulation Day” for the federal government as declared by President Donald Trump, and thus is an opportune time to deliver the findings of The Heritage Foundation’s latest tracking of regulation.

The bad news is that the final year of the Obama administration brought the private-sector costs of its reign of regulatory excess to $122 billion a year.

And that’s the low-ball figure.

On the other hand, the Trump administration, in its first six months, launched a multifaceted reform agenda that has slowed regulatory output. Some rules have been blocked and others rescinded, along with the withdrawal of hundreds of other regulations from the rule-making pipeline.

Six months is too short a time span to declare victory, however, and it remains to be seen whether Trump will succeed in reversing decades of regulatory overreach.

The need for reform has never been greater. Regulation acts as a stealth tax on the American people and the U.S. economy, and exacts an incalculable toll on individual liberty. Trump and his appointees need all of the means available to them to overcome the powerful forces that favor the status quo.

As for that regulatory excess, the Obama administration in 2016 issued more than 2,600 new rules, including 54 “major” regulations that saddled the private sector with $14.7 billion in new annual costs. Based on The Heritage Foundation’s tracking, last year’s rules brought the Obama administration’s eight-year total to more than 23,000 regulations, including 285 major rules with $122 billion in cumulative annual costs.

That was nearly double the $68 billion in new major rules issued under the administration of President Barack Obama’s predecessor, President George W. Bush.

The $122 billion figure does not include significant, but intangible costs, such as lost innovation or violations of individual liberty. Nor does it reflect most of the dozens of regulations issued by independent agencies, which are not required to conduct cost-benefit analyses for new major rules.

As was typically the case during the Obama years, the Environmental Protection Agency in 2016 issued the rule with the highest quantified cost: greenhouse gas and fuel efficiency standards for medium-duty and heavy-duty trucks, estimated to cost $2.7 billion per year.

Some 40 percent of all major rules issued by the Obama administration in its final year (21 out of 54 rules) were finalized after the election on Nov. 8. These “midnight” regulations included some of the costliest rules of the year, including the EPA’s renewable fuel standard ($1.1 billion) and the Department of Energy’s energy conservation standards for air conditioners and heat pumps ($741 million).

On the day Trump took office, his administration inherited 1,985 regulations in the rule-making pipeline—966 in the proposed stage and 1,019 in the final stage.

Like his predecessors, Trump moved quickly to direct department heads to freeze rule-making until a senior Trump appointee approved the proposed regulations.

The moratorium seems to have had its desired effect: There has been a dramatic decrease in the number of new rules adopted. From Inauguration Day through June 30, the Trump administration finalized just eight major rules. Two of these increased regulatory burdens, and two decreased burdens. The other four were administrative in nature and did not impose direct costs on the private sector.

In Trump’s first six months, the administration’s Office of Information and Regulatory Affairs conducted significantly fewer reviews of new rules, and withdrew a higher proportion of new rules, than either of the two prior administrations—the lowest number, in fact, since recordkeeping began in the 1990s.

The president has issued 39 executive orders and 17 memoranda, two of which are intended to have a direct and substantial impact on the regulatory process.

E.O. 13771 directs executive departments and agencies to identify for repeal at least two existing regulations for every one new regulation they promulgate. The order also sets the basis for a “regulatory budget”—and holds agencies to no net increase in regulatory costs this year.

Other significant executive orders and memoranda include directing the secretary of labor to re-examine the onerous fiduciary duty rule; directing the administrator of the Environmental Protection Agency and the assistant secretary of the Army for civil works to review the overly broad definition of “waters of the United States” as it applies to regulation under the Clean Water Act; and directing agencies responsible for regulating domestic energy production to propose revisions to, or rescissions of, regulatory barriers that impede U.S. energy independence.

The administration has instituted a variety of other rule delays and reconsiderations. For example, the Food and Drug Administration on May 4 announced the delay of the compliance deadline for the costly rule on nutrition labeling of standard menu items (from May 5, 2017, to May 7, 2018).

It also revoked an Obama directive allowing transgender students in public schools and other government facilities to use the bathrooms and locker rooms as befit their gender identity. And on June 1, Trump announced his intention to withdraw the U.S. from the Paris Agreement on climate change.

For decades, the burden of federal regulation has grown without constraint—with $122 billion in new annual costs added in the Obama years alone. Trump has pledged to “massively” reduce regulation, and he has so far succeeded in slowing regulatory output. But there remain a number of deregulation initiatives yet to be fulfilled, and we hope the administration follows through.

The unparalleled expansion of the administrative state is crushing America’s entrepreneurial spirit, productivity, and economic growth.