A Revised Tax Code Could Make Filing Your Taxes Much Faster, Cheaper 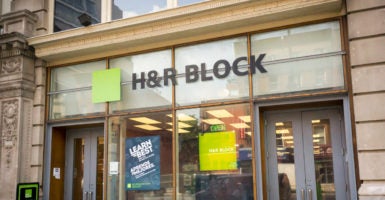 Thanks to the complexity of the current tax code, many Americans resort to getting professional help with their taxes. (Photo: Richard B. Levine/Newscom)

This mantra of simplicity has been ignored for far too long in Washington, D.C. Elites in the nation’s capital have a high tolerance for nuance, caveats and complexity, and for preserving the status quo.

I get it. Politicians have lobbyists, special interests, and big businesses whispering into their ears every day. Those whispers come from powerful, well-connected, and influential groups. Over time, politicians try to appease one group, make an exception, and create a special process to help their friends. Over time, those “one time” exceptions add up to a bloated and complicated process.

Our nation deserves better than a corrupt, duct-taped tax code.

The government has no problem taking hard-earned money from the pockets of American families, and now it needs to respect the American people’s time by making the process of filing taxes fair and simple.

We Americans pride ourselves on having an industrious and entrepreneurial spirit, and we need a tax code that will help us grow our businesses, and will enable us to provide for our families and give back to our communities without spending hours and dollars just complying with a complex system.

We all dread the time of year when we have to pull out old receipts, track down misplaced documents, and set about submitting our personal information to the IRS. But besides being an annoyance, the complexity of the current tax code costs Americans money, time, and stress.

Americans spend 9 billion hours every year complying with the tax code, which costs them more than $400 billion in lost economic productivity every year. Even with all that energy spent, most people aren’t filing their taxes properly.

Some of the most complex provisions can have an error rate of up to 27 percent, meaning some American families are paying more to the government than they should—and oftentimes never get that money back.

Simplifying the tax code would not only save Americans time, but also money. The IRS reported that having a professional prepare one’s taxes costs an average of $261. With a simplified tax code, you could use the money saved to feed a family of four for a week, buy a new suit for a job interview, or even start a small online company.

Democrats and Republicans agree that the tax code doesn’t work well for the American family. Over the years, we have gone from a 400-page tax code in 1913 to the current 74,000-page Frankenstein’s monster. For more than a century now, the federal government has added loopholes, special-interest handouts, and exemptions.

The last time there was a comprehensive overhaul of the tax code was in 1986, during the Reagan administration. If we are asking Americans to file their taxes, they should at least be able to understand the process and not fear they are paying the government more than their “fair share.”

Susan has created the designs and a logo for her company. Her startup costs are small, about $300 for inventory and $150 for other costs, such as a website, shipping supplies, and professional pictures.

She reads online that the average cost for having professional help with taxes is $261 and starts to question if it’s really worth it for her to start this business. The tax compliance alone would be more than half of her planned investment.

The more she reads, the more she realizes she will have to put aside a big chunk of her revenue that will be taxable and that she can’t invest it back into her business. As she learns more, she discovers that she has to keep meticulous records of spending so that she might have the chance to deduct those expenses later on her taxes.

A complex tax code makes Susan pause, because of the time, money, and stress from starting her business. Americans don’t deserve to have their dreams slowed down by the tax code.

Thankfully, the GOP tax reform plan unveiled last week promises to fix the tax code, making it more fair and simple. “Our plan will so dramatically simplify the code that most of you will be able to do your taxes on a form the size of a postcard,” House Speaker Paul Ryan said.

I’m not a Pollyanna who thinks we will ever get back to a 1913-sized tax code. We ask our tax code to do a lot of things—raise revenue for government services, encourage American businesses to grow, and allow our overall economy to thrive. However, Americans deserve to feel confident when they file their taxes that the tax code fosters growth, helps American families, and represents a simple and fair way for all Americans to comply with the law.