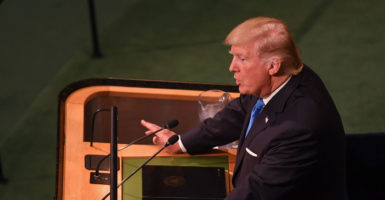 The president took long-needed action on Sunday when he put in place travel restrictions on a number of high-profile Venezuelan officials.

As part of ban, which targets eight countries, these representatives and their relatives will no longer be allowed to obtain U.S. tourism or business visas.

This move should not be interpreted as a ban on Venezuelan citizens. On the contrary, these targeted sanctions are directly aimed at corrupt and repressive government officials.

Trump’s new policy specifically prohibits granting business (B-1), tourist (B-2), and business/tourist (B-1/B-2) visas to officials from the following agencies:

The new policy also withholds such visas from the officials’ relatives.

This proclamation comes on the heels of Trump’s major speech at the United Nations General Assembly, where he denounced the socialist Maduro regime for “imposing a failed ideology” on the Venezuelan people and for “stealing power” from elected representatives.

He pledged to continue ramping up pressure on the Venezuelan dictatorship, and at a dinner with Latin American leaders said the U.S. will “take further action” to address the growing dictatorship.

Corrupt Venezuelan government officials have long been a threat to U.S. public safety. Dozens of high-ranking current and former Cabinet officials from the suspended agencies have been sanctioned by the U.S. as drug traffickers, supporters of terrorism, and human rights violators.

Earlier this year, a CNN investigation revealed how the Venezuelan Embassy in Iraq sold passports and visas to individuals who had connections to terrorism. A former Venezuelan diplomat and legal adviser at the embassy helped uncover information connecting El Aissami to 173 Venezuelan passports and IDs from his time as minister of popular power for the interior.

In the first few weeks of the Trump administration, the Treasury Department officially labeled El Aissami and a close associate “specially designated narcotics traffickers” pursuant to the Narcotics Kingpin Act.

Initial estimates held that El Aissami’s funds in the U.S. were in the tens of millions. To date, the U.S. has seized $500 million in illicit money and assets that have been linked to El Aissami.

El Aissami’s successor, current Minister of the Interior and Commander of the National Guard Nestor Reverol, is also facing a federal indictment in the U.S. for drug trafficking.

Thus far, the Trump administration has put in place targeted sanctions against 40 Venezuelan government officials. The latest travel suspension is a natural follow-up to the administration’s muscular Venezuela policy.

The Maduro dictatorship is driving Venezuela into the ground, and the White House is working to end it. For that, Trump should be congratulated.