3 Proofs That the Conservative Movement Is Alive and Well 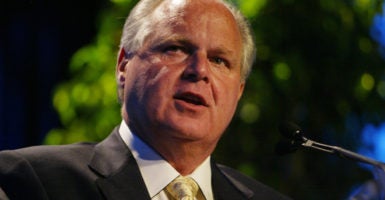 For those who think the conservative movement is in disarray and may be even close to cracking up, I call attention to three anniversaries being celebrated this week.

These three anniversaries reflect organizations that have made a significant difference in our politics and our culture for half a century: the Media Research Center, The American Spectator, and the Fund for American Studies.

Led by the irrepressible Brent Bozell, the Media Research Center is marking its 30th anniversary of exposing the left-wing bias of the mass media by the simplest of methods—using their own words to hoist them high.

At its annual Dishonors Awards dinner, the Media Research Center presented the hysterical reactions of the networks’ finest to Donald Trump’s presidential victory. In their apocalyptic analysis, anchors and reporters alike did everything but urge their viewers to renounce their citizenship and move to Canada or the Cayman Islands without delay.

Rush Limbaugh, the King of Talk Radio with a weekly listening audience of 20 million, revealed that he first heard of Bozell while reading him in National Review, which was all the accreditation he needed. About the mainstream media, Limbaugh was to the point: “They’re dead wrong. They’re dead stupid.”

For half a century, The American Spectator under the editorship of R. Emmett Tyrrell Jr. has been slicing and dicing liberals and progressives like Bill and Hillary Clinton at the hands of accomplished polemicists like P. J. O’Rourke, Ben Stein, Patrick Buchanan, and Malcolm Muggeridge.

When others on the right hesitated, the Spectator welcomed neoconservatives like Irving Kristol to its pages. When the conservative movement waxed lackadaisical and split into factions following the Reagan years, Bob Tyrrell delivered a kick to its pants with his book, “The Conservative Crack-Up.”

A special favorite of the Spectator was The Wall Street Journal’s editorial page editor Robert Bartley, an adviser to the magazine at the time of his death in 2003. At this year’s anniversary gala, the Spectator honored Bartley and featured remarks by Rep. Mark Meadows, R-N.C., chairman of the House Freedom Caucus; Stein; and humorist Greg Gutfeld, host of “The Greg Gutfeld Show” on Fox News.

The American Spectator has weathered financial storms and revolutionary changes in journalism, but is still publishing its Menckenesque insights into American politics—although now in digital rather than print form.

The academic empire of the 50-year-old Fund for American Studies, with its 11 institutes that span the globe from Washington, D.C., to Hong Kong, attest to the old saw that a good idea can have exceedingly good consequences.

The group approached Georgetown University professor Lev E. Dobriansky about sponsoring a summer institute on comparative and political and economic systems at his university. In 1970, 57 students attended the first institute.

In addition, the fund sponsors other educational programs and conferences for students and professors throughout the year, including a 15-week academic and internship program each fall and spring in Washington, D.C., as well as the Walter H. Judd Freedom Award, presented annually to individuals who have advanced the cause of freedom in the United States and abroad.

When we consider the manifold contributions of the Fund for American Studies, The American Spectator, and the Media Research Center over the years and reflect that they are but a part of the conservative movement, we can rest assured that the movement is alive and well and resolute in its goal to preserve ordered liberty in America, both for this generation and generations to come.