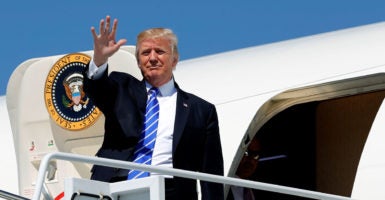 If the recent announcement limiting travel to the U.S. from eight countries came from the pen of any other recent president, it would hardly make news.

But in the case of President Donald Trump, the issue has blown up.

Nevertheless, this administration’s policies have largely been right in line with what the U.S. has consistently done to thwart terrorist travel since 9/11.

After the Sept. 11, 2001, attacks on New York and Washington, the U.S. largely adapted a “risk-based” approach when it came to allowing travel to the homeland.

In essence, this meant constantly monitoring how terrorists were attempting to travel, assess their security procedures and vulnerabilities, and updating policies and safeguards to try to stay ahead of the threat.

This approach has largely worked. The Heritage Foundation maintains a database of known Islamist terrorist plots aimed at the U.S. since 9/11. Although the number of plots is nearing 100, few of those plots over the past decade originated overseas.

Despite the hyperpartisan rhetoric and punditry, since this team took the White House, it has followed the same formula as previous administrations. That was clear from the early days of the presidential transition team months before Trump took office, when his official policies were taking shape.

A read of the president’s recent executive order shows not much has changed. The order details the extensive review that the administration conducted assessing the risks of terrorist travel and the capacity and willingness of governments to work with the United States.

An expert who assesses global risks would find the list of countries cited predictable and unremarkable, including countries that are known state sponsors of terrorism or have demonstrated a lack of capacity to work effectively with the U.S. against emerging threats that may try to make their way to our shores.

There was little question that taking precautions is prudent. In recent years, we have seen terrorists travel to countries and undertake attacks—especially in Europe—using either visas or exploiting refugee status.

Travel bans are not the be all, end all of good counterterrorism practices, nor are they static—they have to be dynamic to stay ahead of the threat. They are, however, a reasonable tool when used responsibly. That is how they ought be viewed.

They are not a political football for partisan voices and politicized judges to punt back and forth across the field.

Note: This article has been modified to correct the number of countries listed in the president’s new travel restriction.