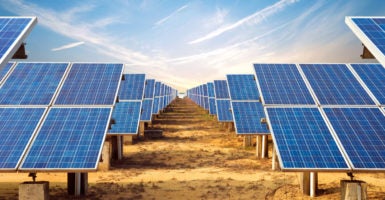 The International Trade Commission has recommended that the government shield Suniva and SolarWorld with protective tariffs. (Photo: iStock Photos)

Last Friday, the International Trade Commission voted 4-0 in favor of SolarWorld and Suniva’s Section 201 petition, finding that imports of solar cells and solar panels have inflicted “serious injury” on the domestic solar market.

The commission made the wrong call with its verdict and is setting a dangerous precedent. Placing special-interest tariffs, large or small, on intermediate goods has serious repercussions for the domestic economy, especially other parts of the domestic solar industry.

The next step is for the commission to make what are called remedy recommendations to the president, which are expected in November. Imposing these tariffs would give Suniva and SolarWorld the green light to raise costs and monopolize the market.

The steel industry serves as a prime example of the harmful effects of imposing tariffs under Section 201. Between 2002 and 2003, 200,000 Americans working in steel-consuming industries lost their jobs due to higher steel prices.

Ultimately, tariffs only raise the prices of domestic products, making it more difficult for secondary industries, and eventually the consumer, to afford basic materials and finished products.

And it is not only this decision that will cause injury. The solar industry already receives a plethora of government subsidies, ranging from grants to tax credits to loan programs.

In fact, the University of Texas at Austin found that solar energy is the most subsidized energy source in the United States. Even more interesting is that Suniva, along with SolarWorld’s parent company, both filed for bankruptcy earlier this year after having already received over $11 million each in federal handouts.

Evidently, government handouts do not result in producing a growing, thriving industry. Additional “protections” will not have a different result.

Friday’s decision also sets a dangerous precedent going forward. Other companies and industries now have a greater incentive to petition the International Trade Commission for tariffs to protect their own special interests.

In fact, this is already happening. Whirlpool filed its own Section 201 case in June and will be looking for a favorable decision in light of Friday’s outcome.

The final decision lies with President Donald Trump. The president should reject any recommendations by the International Trade Commission that would result in tariffs or other measures restricting imports.

Trump has stated he wants to advance economic growth and prosperity in the U.S. Refusing to make decisions that pick winners and losers in the domestic economy is a key part of that mission.