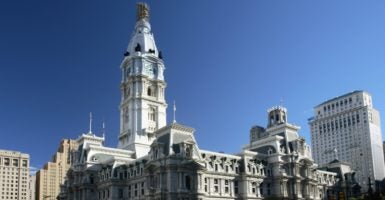 Since 2006, 317 registered voters have contacted the City Commissioners, which oversees Philadelphia elections, asking that their registrations be canceled because they are not citizens. (Photo: Caro / Sorge/Newscom)

Philly.com reported that many of them registered while either applying for or renewing their driver’s licenses. All applicants were offered the option to register to vote even after providing documentation to DMV officials that although they were in the country legally, they were not citizens.

Al Schmidt, the lone Republican on the Philadelphia election commission, said that all 317 registrations have been canceled and he has been speaking with the Pennsylvania Department of State about the problem.

“For the majority of these people, it’s completely plausible to believe they thought they were eligible to vote,” Schmidt claimed, despite the fact that voter registration applications require an applicant to answer a citizenship question and to swear under oath that he is a U.S. citizen.

“All voter fraud is an irregularity; not all voter irregularities are fraud,” Schmidt said, adding that it is still illegal. “Regardless of the intent, the damage is still the same.”

A year before Schmidt stoked these recent concerns about Philadelphia election integrity, he was fighting a federal lawsuit after failing to disclose the same information about noncitizens and his failure to remove felons from the voter roll.

Public Interest Legal Foundation later published a report detailing 86 cases of noncitizens whose voter registrations were quietly revoked between 2013 and 2015. Almost half of them had voted at least once.

When the commissioner is not busy claiming to find alien voters who actually outed themselves, he still defends the city’s policy of keeping felons registered. Unlike most states, Pennsylvania does not require that someone in prison have his or her record removed or otherwise marked to prevent ineligible voting—a violation of the National Voter Registration Act, an American Civil Rights Union suit argues.

A major component of Philadelphia registering noncitizens involves the National Voter Registration Act, or “motor voter,” which was passed in 1993. It requires state governments to offer voter registration to any eligible person who is applying for or renewing their driver’s license or registration.

This requirement has been misinterpreted by state officials as supposedly prohibiting them from failing to offer everyone who applies for a driver’s license the opportunity to register. This includes cases where the DMV official knows the individual is not a U.S. citizen.

Schmidt’s office has obtained data on 220 of the 317 registrations. Of these 220, 44 voted in one election while 46 voted in multiple elections. It is unclear how many more noncitizens are registered and voting since Philadelphia election officials take absolutely no steps whatsoever to verify the citizenship status of individuals who register to vote. They only found out about the 317 because these registered noncitizens asked to be removed from the rolls.

The Pennsylvania Department of State has a review underway; but has already reported that, since 1972, 1,160 voters statewide have requested their registrations be canceled because they were not citizens. There can be little doubt this is just the tip of the iceberg.

Two other cases of noncitizen registration and voting show that this is not solely a Pennsylvania problem. Earlier this month, Public Interest Legal Foundation published a report after a six-month review of New Jersey voter registrations. It found that 616 noncitizens registered to vote, 76 percent of whom admitted their noncitizenship status at the outset. Yet they were registered by election officials anyway. Some noncitizens were even asked if they wanted to register to vote after presenting a “Green Card” to get their driver’s license.

Added to the Pennsylvania and New Jersey cases, Virginia has also faced a multitude of noncitizens registering to vote. This May, Public Interest Legal Foundation published a report showing that between 2011 and May 2017, Virginia removed 5,556 noncitizens from its voter rolls. Those noncitizens cast 7,474 votes in multiple elections. And in the last 12 years in Virginia, there have been two statewide attorney general races that have been decided by fewer than a thousand votes.

Just more evidence of the kind of problems that exist in our voter registration and election process.