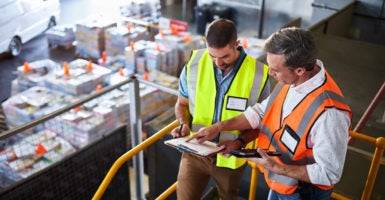 Studies show that at least 75 percent of the cost of corporate taxes are passed on to workers in the form of lower wages. (Photo: iStock Photos)

Politicians who don’t want tax reform are busy making the case that cutting taxes for business will not help workers.

Those politicians are backed up by government scorekeepers who, unfortunately, have their economic analysis exactly backward.

Businesses invest money in their workplace so that their employees can be more productive. Part of this involves paying higher wages to employees who become more productive and are in higher demand from other firms who are making similar investments.

American corporations pay a federal corporate income tax rate of 35 percent—one of the highest in the world. High corporate taxes discourage this kind of investment in American workplaces, thus killing the potential for workers to earn higher wages.

Most of the cost of corporate taxes—between 75 and 100 percent—is passed on to workers in the form of lower wages. This fact is shown in the results of 10 separate economic studies.

On the flip side of the coin, American households would share in the benefits of a corporate tax cut in receiving higher wages.

This is where government scorekeepers like the Joint Committee on Taxation and the Congressional Budget Office get it wrong.

In contradiction to the relevant economic literature, they maintain that only one quarter of the corporate tax is passed on to workers. The other 75 percent is assumed to go to owners of capital—the corporate owners.

This misguided view is posing an obstacle to tax reform, as government modeling assumptions have a bias toward viewing the wealthy as beneficiaries of corporate tax reform. They do not properly account for the benefits that will accrue to lower-income wage earners.

Contrary to what these government models would suggest, slashing the corporate tax rate would help the poor far more than the rich.

When Congress finally releases a detailed tax reform plan, the distributional analysis could make or break its political viability. If government scorekeepers continue to assume that owners of capital will benefit the most from tax reform, they will mislead the public.

It would be a shame if backward assumptions misinformed the public and obstructed this historic opportunity to update the U.S. tax code. The current corporate tax code is largely responsible for our anemic economic growth, the historically low rate of business start-ups, and reduced economic dynamism.

Across the U.S., corporations employ 55 million hardworking people who create products for global and domestic markets. A lower corporate income tax rate will benefit not only those 55 million Americans, but all Americans, as increased investment and job creation would put upward pressure on all wages.

Moreover, by attracting business and investment back to the U.S. with a more favorable tax environment, tax reform will renew America’s place as a top global destination to do business and hire workers.

That’s a change that all lawmakers who care about the well-being of American families should embrace.