Conservatives Push for Tax Reform in 2017 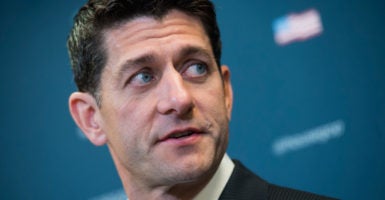 In a letter addressed to House Speaker Paul Ryan and others, groups and activists urge members of Congress and the Trump administration to pass a “comprehensive, pro-growth tax reform in 2017.” (Photo: Tom Williams/CQ Roll Call/Newscom)

As the end of the year nears, some conservative organizations are pushing for tax reform

On Sept. 14, Americans for Prosperity, along with 87 other right-leaning activists and organizations, sent a letter to “the Big Six” negotiators in the federal government, including Speaker of the House Paul Ryan, Senate Majority Leader Mitch McConnell, and Treasury Secretary Steven Mnuchin.

In the letter, the groups urge members of Congress and the Trump administration to pass a “comprehensive, pro-growth tax reform in 2017.”

“It is key,” the letter states, “that tax reform reduce rates for Americans across the board, drastically simplifies the code for families and individuals, ends the death tax, unrigs the system to promote a healthy economy, and implements a territorial system of taxation so businesses large and small can compete.”

In a recent report titled “A Record of Success: How Bold Tax Relief Powers Economic Growth,” Americans for Prosperity and Freedom Partners used the John F. Kennedy cuts of 1964, Ronald Reagan cuts of 1981, and George W. Bush cuts of 2003 to show how tax cuts increase gross domestic product, federal revenue, and the economy as a whole.

This year is a “once in a generation opportunity” to get tax reform passed, said Phillips.