A Failing Report Card for the Arms Trade Treaty 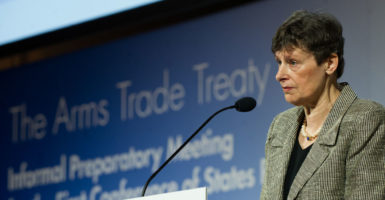 The third annual Conference of States Parties of the Arms Trade Treaty is being held this week in Geneva, Switzerland.

As I pointed out on Thursday, many of the nations that are party to the treaty, which purports to require regulation of the conventional arms trade, aren’t even paying their bills.

But there’s more to the treaty than money. At its heart is the argument that the arms trade needs more transparency, and that the treaty’s mandated reports are the way to get it.

Nations that sign and ratify the treaty—its states parties—are required to submit an initial report on their compliance with the treaty, and an annual report about exports and imports of the conventional arms covered by the treaty.

Let’s see how those nations are living up to these reporting obligations.

In a word: poorly. Of the 92 states parties, 85 now owe an initial report. But only 61 nations (72 percent) have actually submitted a report. Moreover, six of these reports are secret, which renders them irrelevant for the purposes of transparency.

Of all nations that have reported, 36 (59 percent) are in Europe. Reporting from the rest of the world is limited at best.

The picture on annual reporting is no better, and may be worse.

Again, Europe dominates the reporting nations. Of the reports submitted for 2016, 33 (70 percent) are from European nations. Developed nations like Australia account for most of the rest of the non-European reporting.

Only seven nations from the developing world—Burkina Faso, El Salvador, Liberia, Mauritius, Panama, Senegal, and Sierra Leone—reported on 2016. Whatever the treaty is doing, it’s not doing much of anything in the Third World.

In short, it’s almost certain that the percentage of states parties submitting their required annual report will decline for 2016, and more than possible that the number of reports will decline—in spite of the fact that 14 more nations acceded to the treaty in 2015, and so owe a report on 2016.

And of course, none of these numbers say anything about whether or not all this reporting is accurate. That’s something in which the treaty’s advocates show curiously little interest.

They’re not happy about the six reports that excluded sensitive information, but two of those six reports came from Finland and Sweden—not widely known as irresponsible nations.

The telling fact isn’t so much that six reports admitted excluding sensitive information. It’s that the other 41 didn’t admit it.

For treaty advocates, it’s just a numbers game: The more reports, the better. The contents or accuracy of the reports are of little interest.

From the enthusiasm with which they demanded reporting, you’d think they would spend hours poring over the ones they’ve got, tracing the intricacies of the arms trade. Actually, they just chase ambulances, with the Saudi-Yemeni war being the latest siren call to which they have flocked.

Why does reporting matter? Because treaty advocates—to the extent they’re interested in anything more than hating on the U.S., Britain, and Israel—have insisted adamantly that the treaty will succeed or fail to the extent that it promotes transparency.

By their own measure, therefore, the treaty is a failure.