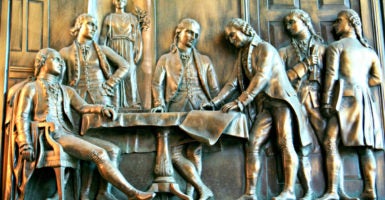 Detail from a frieze depicting the signing of the Constitution decorates the U.S. Capitol. (Photo: Steve Gottlieb/Stock Connection Worldwide /Newscom)

Joseph Postell is associate professor of political science at the University of Colorado-Colorado Springs and visiting fellow in American political thought in the B. Kenneth Simon Center for Principles and Politics at The Heritage Foundation. He is the author of “Bureaucracy in America: The Administrative State’s Challenge to Constitutional Government.”

The nation marks the 230th birthday of our Constitution this weekend. On Sunday, many Americans of all political persuasions who are aware of Constitution Day will praise the Framers of that document and express gratitude that they live under its protections.

They will celebrate the fact that we have a representative democracy, where the laws are written by people who must stand for re-election at regular intervals.

They will praise our system of separated powers, where no person has the power to be lawmaker, investigator, prosecutor, judge, jury, and executioner. And they will cheer for the Bill of Rights, which guarantees our freedoms from searches without probable cause and from self-incrimination, and secures our rights to due process.

Of course, we haven’t parted with the Constitution officially.

Congress still enacts laws from time to time, and we still elect its members. The president’s election is independent from Congress, unlike many parliamentary systems, and federal judges are independent of the legislative and executive branches because of their tenure during good behavior and their fixed salaries. It would be incorrect to say that today’s system is completely unconnected to the Constitution’s structure.

The agencies have the power to “adjudicate” disputes stemming from their rules, in what Columbia law professor Philip Hamburger calls “miniature courts” within the agencies themselves. Administrative judges and administrative law judges are new features of our political system, so that even the judges are no longer independent.

In many cases, the Bill of Rights itself has been considered inapplicable.

Unlike traditional law enforcement, many bureaucrats have power to search private property without a particular warrant. In administrative proceedings, the right to avoid self-incrimination is frequently dispensed with. The right to trial by jury, guaranteed by the Seventh Amendment, is not always recognized, even in administrative decisions where millions of dollars of fines are on the line.

This amounts, in essence, to a policymaking process that exists in limbo, somewhere outside the normal constitutional process and the normal constitutional constraints. Almost everyone paying attention acknowledges that the existence of this administrative state raises important constitutional questions. But to many, it seems like bureaucratic government is just one of those things that we’re stuck with as a necessary part of modern life.

This is not the path we had to take.

Regulation and administration have existed throughout American history. There were building codes, environmental, health, and safety rules, and plenty of regulatory programs during the first years of our nation. The difference is that those regulations were enacted by elected representatives passing laws, or by judges who applied the principles of common law to resolve disputes among citizens.

The regulations were merely enforced, and carried out, by the administrative agencies that today are often the lawmakers, investigators, judges, juries, and executioners. We had administration, but not an administrative state.

It was more difficult, admittedly, to regulate through these constitutional mechanisms. But people agreed that the Constitution’s principles were important enough to accept the inconvenience of following them. Looking back at how they managed to enact regulations within the Constitution’s boundaries is something we should be doing today.

For several years, Congress has taken a closer look at reforming this administrative state that has grown up around the Constitution and threatens its core principles. But thus far, very little has been completed.

The path back to constitutional government will be long and difficult from this Constitution Day, but many good ideas have been offered for bringing our administrative behemoth back into the constitutional framework.

It is the responsibility of Congress to rein in the administrative state and begin the slow, arduous task of rebuilding constitutional government.