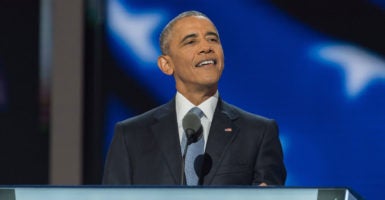 GMMB received a total of $58.4 million in federal contracts from 2009 to 2017, according to USASpending, which tracks federal spending through contracts, grants, loans and other forms. GMMB’s annual revenue is an estimated $32.6 million, according to D&B Hoovers, a private business research and rating firm.

Jim Margolis joined fellow Democrat Frank Greer in GMMB in 1985. Since then, Margolis has been one of the Democratic Party’s top media strategists.

Margolis was lead advertising strategist and adviser for former President Bill Clinton and Obama, and for the 2016 Democrat nominee Hillary Clinton, which delivered considerable profits for GMMB. Margolis also produced the 2008, 2012, and 2016 Democratic National Conventions, and was the co-producer of Obama’s two inaugurations.

Obama’s presidential campaign, “Obama for America,” disbursed to GMMB upward of $700 million in media buys for his 2008 and 2012 campaigns combined, according to filings reported by the Federal Election Commission. GMMB confirms this amount on the company’s website, stating Margolis oversaw “each cycle’s half-billion dollar advertising effort.”

The second-most lucrative government account for GMMB is a community service agency founded by Bill Clinton, the Corporation for National and Community Service, which awarded it $13.1 million worth of contracts. Other agencies that awarded contracts to the company include the Department of Homeland Security ($1.6 million) and the Department of the Interior ($24,000).

The Consumer Financial Protection Bureau’s outsized role in payments to the advertising agency may fuel new controversy about the embattled bureau, which Warren came up with when she worked as an Obama appointee in the Treasury Department.

Congress and lower federal courts have charged the consumer agency’s operation is unconstitutional because its director, former Ohio Attorney General Richard Cordray, can only be removed for “cause.” All other federal department and agency heads serve either at the president’s pleasure and can be removed at his will or for specified terms.

Republicans have also denounced Obama, Warren, and the Democratic Congress that created the Consumer Financial Protection Bureau for housing the agency within the Federal Reserve under the Dodd-Frank Act, making it immune from normal congressional oversight.

A federal appeals court delivered a near-death blow to the consumer bureau in October 2016, ruling the agency’s unique independence was unconstitutional. The court ordered Cordray’s powers be curbed and ruled the president can dismiss him.

“Even though the CFPB’s structure was found to be unconstitutional, it still runs amok, unaccountable to the American people and to Congress, and pushes its murky, far-left agenda,” he said.

Duffy said he is not surprised the consumer bureau would want to dump money into liberal firms supporting liberal candidates.  “Those are the very candidates who enable the CFPB’s bad behavior,” he said.

Duffy has urged Trump to fire Cordray, and asked Congress to “rein in” the CFPB and hold it accountable.

“The optics are extremely ugly when you have a major Democratic insider receiving a massive amount of taxpayer money,” Phil Kerpen, president of American Commitment, a conservative political activist group, said. “I think any time a political consultant is getting paid on the political side and with our tax dollars, that deserve an enormous amount of scrutiny.”

“There are many, many good reasons for President Trump to remove Richard Cordray,” Kerpen said. “This is another piece of evidence that there’s cause for removal.”

“It’s important that the Republican Congress do serious investigations into crony capitalism and other abuses over the last eight years,” Norquist said. “You can’t reform government until you admit what the government has done that’s corrupt.”

Cordray initially hired GMMB on a series of smaller contracts in 2013, then in June 2017 awarded the political firm a new, lucrative $14.8 million contract. That award is the largest single government contract won by the Margolis firm since it first did business with the Obama administration.

Another $2.7 million went to the firm for “Paid Search Marketing,” which Gilford said was awarded because “we want those consumers to easily find our free and unbiased information before they make a financial decision.”

Because the contract is closed, she said she could not provide any information about $856,000 that was paid for its “branding strategy.”

All four of the government departments and agencies claim the GMMB contracts were “competitively bid.” However, a review of 241 contracts show that all but four of the transactions had only a single bidder: GMMB.

Gilford defended the single-bidder process, saying once the Consumer Financial Protection Bureau initially chose GMMB it was placed under the federal procurement category of “Blanket Purchase Agreement,” or BPA. He confirmed all of its contracts were under that category since the firm was initially selected in 2013.

The spokesman for the Corporation for National and Community Service confirmed that its contracting procedures allowed the agency to issue new work, called “call orders,” without soliciting outside bids for the work.

Kerpen questioned why the consumer agency used only GMMB, since the advertising services it provides are widely available elsewhere.

“Media buying and media production are extremely competitive fields with many vendors that are highly competent to engage in them,” he said. “The fact you have a single bidder is prima facie proof that there was not a genuine competitive bidding process where other bidders knew of the opportunity.”

Ethan Barton contributed to this report.