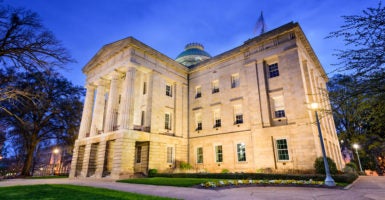 It may only be September, but lawmakers in North Carolina have a key opportunity to do some spring cleaning.

Like in many states, North Carolina’s criminal codes are overburdened by an excessive number of crimes, thereby feeding into the problem of overcriminalization. The state also suffers from an extremely powerful and overly prohibitive occupational licensing system.

Both of those problems, however, can be addressed this session.

What Does Section 10 Do?

Section 10 of SB 114 would create a state commission tasked with drafting a “new, streamlined, comprehensive, orderly, and principled criminal code.”

While the commission would have to ensure the new code reflects the substantive policy judgments of both the current code and established case law, the commission would also have fairly broad authority to propose much-needed changes and additions to the code’s substance and organization.

In keeping with the commission’s goal of making the law easier for citizens to understand and apply, the proposed code would include an official commentary explaining how each code section should operate.

Further, while Section 10 does not directly address the state’s occupational licensing system, it does permit the commission to recommend limitations on the ability of administrative boards, agencies, and local governments to create new crimes.

It could also review existing criminal offenses defined by those entities and recommend they be reclassified as infractions punishable only by a fine.

That way, the commission could organize the new regulations into the same code section as more traditional criminal offenses, instead of allowing them to be scattered throughout dozens of possible locations.

This Reform Is Sorely Needed

The disease of overcriminalization has long infected all levels of government in the United States. Citizens often call on the federal government to stop the explosive growth of its criminal codes and make these laws more accessible to the average American.

As the number and complexity of laws criminalizing relatively benign behavior has increased, so too has the likelihood people will be punished with criminal sanctions under statutes they did not know existed and could not have known applied to their actions even if they were aware of the statute’s existence.

States, however, also deserve a share of the blame. The problem of overcriminalization is compounded by an ever-expanding occupational licensing system at the local level.

Nearly one-third of American jobs now require some sort of government license, often from state agencies. Many of the boards and agencies overseeing this licensure have at least some power to create new crimes in their areas of jurisdiction. North Carolina is no exception. The state’s 55 licensing boards have relatively unchecked authority to create new criminal offenses, and many of these offenses are scattered throughout numerous sections of law.

The licensing regimes cover over 154 diverse job categories, from barbers and emergency medical technicians to makeup artists and tour guides. As a result, North Carolinians have on occasion faced jail time for actions they did not know where criminal.

In 2012, Cooksey ran afoul of the North Carolina Board of Dietetics/Nutrition after he started a diabetics health blog detailing diet changes he claimed drastically increased his quality of life.

The board sent Cooksey cease-and-desist letters, threatening him with four months in jail for the crime of practicing dietetics without a license. Apparently, it considered his free diet advice akin to the work of paid health professionals.

Only after three years of lawsuits did the board change its guidelines and drop its case against Cooksey.

Pruner was not so lucky. He received a 45-day suspended jail sentence and 12 months of probation after selling hot dogs from his vending cart outside the Duke University Medical Center.

No one was sickened by his food, nor did the North Carolina Department of Environment and Natural Resources accuse him of operating in unsanitary conditions.

Pruner’s heinous crime? He did not pay the $175 fee for county permits or the hundreds of dollars a month required by the board for a “commissary agreement”—a contract to rent space in a health-inspected restaurant.

As recently as 2016, North Carolina was forced to defend its Board of Dental Examiners all the way to the Supreme Court.

The board had previously issued a self-serving ban on the provision of teeth whitening services by non-dentists, sending 47 different letters to “offenders” reminding them that the unlicensed practice of dentistry is a crime. It did so despite the fact the North Carolina Dental Practice Act nowhere specifies that teeth whitening constitutes the practice of dentistry.

The court held the board was not immune from the lawsuit against it, because it was not subject to active supervision by the state.

In other words, the state’s licensing agency—which could create, threaten, and impose criminal sanctions—was autonomous enough that it could not claim its regulations were “state actions” that might otherwise have entitled them to assert a valid defense of sovereign immunity.

North Carolinians would certainly benefit from a less convoluted, more organized criminal code that does not leave them searching through tomes of complicated legalese simply to find out if they might go to jail for offering diet advice on the internet.

Unfortunately, SB 114 is currently bogged down in the Senate’s Committee on Rules and Operations due to concerns over tax breaks in unrelated sections.

Hopefully, for the sake of their constituents, North Carolina lawmakers will be able to settle their differences on the bill’s tax reform sections so that Section 10’s much-needed criminal code reforms can be implemented.