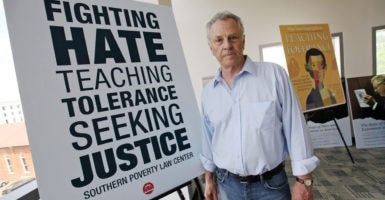 Morris Dees is a co-founder of the Southern Poverty Law Center, which labels socially conservative organizations such as Ruth Institute as “hate groups.” (Photo: Robert King/Polaris/Newscom)

The founder of a nonprofit dedicated to repairing families says he thinks being incorrectly labeled a “hate group” prompted the company that processed donations to drop her organization.

Ruth Institute’s biblical stance on issues such as gender identity and same-sex marriage led to its being labeled a hate group by the Southern Poverty Law Center, which has done the same to other mainstream conservative organizations.

Vanco Payment Solutions, her nonprofit’s online donation processor for several years, abruptly emailed to say “we are severing our relationship with you,” Jennifer Roback Morse, founder and president of Ruth Institute, told The Daily Signal.

“The most logical conclusion is the fact that we were in the news with this hate map that SPLC [Southern Poverty Law Center] puts out, but no one has said that directly,” Morse, who is Catholic, said.

“I don’t know that for a fact,” she added. “We’re just surmising that must be the case.”

According to a press release from Ruth Institute, based in Lake Charles, Louisiana, the Aug. 31 email notice read:

Vanco has elected to discontinue our processing relationship with the Ruth Institute. The organization has been flagged by Card Brands as being affiliated with a product/service that promotes hate, violence, harassment and/or abuse. Merchants that display such attributes are against Vanco and Wells Fargo processing policies.

Vanco Payment Solutions is a registered independent sales organization, or ISO, of Concord, California-based Wells Fargo Bank. It is not clear what Card Brands is.

After receiving the email, Morse said, she discovered that the donation function of Ruth Institute’s website was disabled, “so obviously they had done it before they even sent us the notice.” For now, she has opted to use PayPal in place of Vanco.

In doing so, critics say, the Southern Poverty Law Center equates respected conservative organizations with actual hate groups such as the Ku Klux Klan and the National Vanguard, a neo-Nazi organization.

SPLC flagged Ruth Institute as a “hate group” in 2013, the institute said in its press release.

Morse is second from left in this 2015 tweet by one of Ruth Institute’s board members, Walter Hoye:

Pastors: Lori and I just love Dr. "J" (in between Lori and I) who leads the @RuthInstitute. #BrothersWeNeedToTalk. pic.twitter.com/8olMG78Tiw

Hoye told The Washington Times that listing Ruth Institute alongside racist groups such as the KKK is “reprehensible.” In Georgia, he said, the Klan lynched his great-grandfather and set his house on fire while his 14 children were inside.

Morse said CNN’s Aug. 17 publication of a map locating “hate groups” listed by SPLC attracted attention to her organization. Afterward, she said, a reporter wrote a story after seeing Ruth Institute on that map.

Morse wrote an article about the experience that was published by The Stream, a conservative news site.

“I think people need to understand that the left takes the sexual revolution very seriously,” Morse said in an email to The Daily Signal. “This is a core issue for them. They think that being against gay marriage is the equivalent of being a skinhead or a member of the Klan. That’s how they are treating things.”

The Daily Signal requested comment from both Vanco and the Southern Poverty Law Center, but did not receive a response by publication deadline.

Sara Hassell, a Wells Fargo spokesperson, told The Daily Signal in an email that “we don’t have anything to share on the matter at this time.”

In June, GuideStar, an organization that calls itself a neutral aggregator of tax data on charities and other nonprofits, incorporated SPLC’s “hate group” labels, a move protested by dozens of conservative leaders. GuideStar then removed the labels.

“They can’t argue against us, so what they do is they prop us up next to … the Klan, guys in white hoods and guys with swastikas,” she said.

The issue should be of grave concern to conservatives, Morse said.

This report has been modified to include Walter Hoye’s remarks.