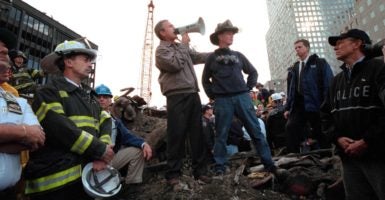 The United States and allies seem to lack a clear strategy for toppling the terrorist threat 16 years after the worst terrorist attack in American history, experts say.

Since the 9/11 attacks, there have been another 97 terrorist plots against the United States, and the bulk of those 15 successful attacks happened in the last six years, according to a database maintained by The Heritage Foundation.

A total of 27 of the overall plots came from the Islamic State, David Inserra, a homeland security policy analyst for The Heritage Foundation, said Friday during a panel.

“The variable explaining this is ISIS,” Inserra said, explaining the uptick in attacks in recent years. “Something changed, ISIS occurred.”

For example, Inserra noted the largest attack since 9/11 was the mass shooting killing 49 at the Pulse gay nightclub in Orlando last year by an Islamic State-inspired attacker.

Terrorism itself has changed since the Sept. 11, 2001, terrorist attacks that destroyed the World Trade Center in New York after two hijacked airliners crashed into the towers. Another plane crashed into the Pentagon. Heroic passengers aboard a fourth plane thwarted a fourth attack by forcing the crash of a hijacked plane in a Pennsylvania field.

The 9/11 attack was carried out by al-Qaeda, which has diminished, while the Islamic State has risen, as have other terrorist groups such as al-Shabab and Boko Haram in Africa.

About 70 Americans sought to support al-Shabab either financially or in traveling to fight with them, said Joshua Meservey, senior policy analyst for Africa and the Middle East at The Heritage Foundation.

“These groups are motivated by ideology and there isn’t much the U.S. can do to affect that,” Meservey said about the African terror groups.

There are five key questions the “smartest people on the planet” haven’t come to a consensus on regarding how to combat Islamic terrorism in the post-9/11 world, said Mary R. Habeck, an adjunct professor of strategic studies at Johns Hopkins School of Advanced International Studies.

“Looking around the world, what country can honestly say they have defeated Islamist terrorism? The answer is none of them,” Habeck said.

Those questions, she said, are:

2. How should we combat the enemy?

3. What is the relationship between the enemy and Islam?

4. What is the objective in war?

For instance, global leaders aren’t clear if the enemy is the ideology of jihadists and extremists broadly or more narrowly specific terrorist groups such as the Islamic State, she said.

Regarding combatting the problem: Is this a counterterrorism matter in which we, as Habeck said, “can just sit back and drone them to death?” Or, she asked, does the United States act alone, or insist on an international coalition?

Considering Islam, Habeck said, fewer than 1 percent of Muslims and an even smaller number of of the religion’s clerics subscribe to the radical views.

Regarding the objective, Habeck asked, does the United States keep itself safe or also its allies? Does the country want to win the war—as in destroying the enemy and discrediting its ideology? Or, will the United States just manage a conflict?

During a question-and-answer portion of the panel, someone asked why terrorism became such a problem.

“Broadly, it has been the failure of nearly every single regime in the Middle East to create successful societies,” Habeck said. “The governments have too often been corrupt or lacked any moral sense at all.”

Her reference included the more secular dictators whose rules prompted the religion-backed revolutions that overthrew their governments, from the shah of Iran to Egypt’s Hosni Mubarak, both considered somewhat pro-Western leaders.

Europeans were somewhat naïve about the terror threat in the past, but have since become almost numb to minor attacks, said Robin Simcox, the Margaret Thatcher fellow at The Heritage Foundation.

Simcox said knife attacks have become common enough to rarely get headlines, while vehicles and trucks have “so far got a 100 percent success rate.”

Germany has seen skyrocketing attacks since the influx of Syrians into the country after the refugee crisis, he said.

“The terrorism threat in Europe has metastasized just in the last few years,” Simcox said.