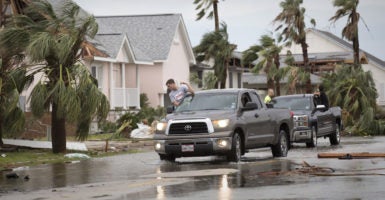 Flooding in homes and businesses across Houston was still on the rise when Politico ran a provocative article, titled “Harvey Is What Climate Change Looks Like.”

Politico was not alone, as another news outlet called the one-two punch of Harvey and Irma the potential “new normal.” Brad Johnson, executive director of the advocacy group Climate Hawks Vote, says Harvey and Irma are reason to finally jail officials who “reject science.”

Rather than focus on the victims and offer solutions for speedy recovery, pundits and politicians in the wake of Harvey focused on saying, “I told you so.”

Except they’re not telling the full story.

Consider this data from a 2012 article in the Journal of Climate, authored by climatologists Roger Pielke Jr. and Jessica Weinkle. Pielke tweeted a graph from the paper that shows no trends in global tropical cyclone landfalls over the past 46 years.

By request: time series of global landfalling tropical cyclones since 1970, based on work with @RyanMaue & J. Weinkle in Journal of Climate pic.twitter.com/tYKfCdDKvU

Harvey and Irma are terrible, but we need perspective:
Major landfalling US hurricanes trending downwards over past 140 years pic.twitter.com/AEqaRQAx4t

The Intergovernmental Panel on Climate Change reported in its most recent scientific assessment that “[n]o robust trends in annual numbers of tropical storms, hurricanes, and major hurricanes … have been identified over the past 100 years in the North Atlantic basin,” and that there are “no significant observed trends in global tropical cyclone frequency.”

Further, “confidence in large-scale changes in the intensity of extreme extratropical cyclones [such as ‘Superstorm’ Sandy] since 1900 is low.”

For instance, Vox wrote that man-made global warming did not actually cause Harvey, but simply exacerbated the natural disaster by creating heavier rainfalls.

But this claim is discredited by University of Washington climatologist Cliff Mass, who after examining precipitation levels in the Gulf found that “[t]here is no evidence that global warming is influencing Texas coastal precipitation in the long term and little evidence that warmer than normal temperatures had any real impact on the precipitation intensity from this storm.”

Mass went on to explicitly refute those who attribute Hurricane Harvey to climate change:

The bottom line in this analysis is that both observations of the past decades and models looking forward to the future do not suggest that one can explain the heavy rains of Harvey by global warming, and folks that are suggesting it are poorly informing the public and decision makers.

Politicians seeking to exploit Harvey and Irma as reasons to act on climate change would only make a bad situation worse. Climate policies and regulations designed to prevent natural disasters and slow the earth’s warming simply will not do so.

Such policies aim to limit access to affordable, reliable conventional energy sources that power 80 percent of the country. Restricting their use through regulations or taxes will drive energy prices through the roof and make unemployment lines longer.

Further, these policies will destroy economic wealth, meaning fewer resources would be available to strengthen infrastructure to contain the future effects of natural disasters and to afterward.

Instead of blaming man-made greenhouse gas emissions, climate catastrophists should see natural disasters for what they really are: natural.

If policymakers want to take a page out of Chicago Mayor Rahm Emanuel’s “never let a crisis go to waste” playbook, they should worry less about costly nonsolutions to climate change and focus on natural disaster response, resilience, and preparedness.