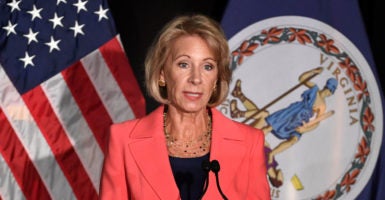 Education Secretary Betsy DeVos announced in a speech Thursday that she will roll back an Obama-era “guidance” document that drove colleges to implement Star Chamber-like tribunals to mishandle sexual assault cases.

The guidance forced colleges to weaken already minimal due process protections for those accused of rape and sexual assault, and threatened schools that refused to do so with losing federal funding.

The Education Department will seek “public feedback and combine institutional knowledge, professional expertise, and the experiences of students to replace the current approach with a workable, effective, and fair system.”

DeVos highlighted a proposal by two former prosecutors for states to set up specialized centers with trained professionals for investigation and adjudication of sexual assaults.

Another proposal is mandatory reporting of sex crimes to law enforcement as a condition of federal or state funding.

These proposals would take the pressure off colleges to conduct quasi-criminal proceedings, which college administrators are ill equipped to do. No one would expect a college tribunal to handle a murder on campus.

It makes no sense for a college to handle other serious crimes such as sexual assaults and rapes. Rapists are criminals, not just college students who violate a school’s honor code. They should be prosecuted in criminal court, and if found guilty, punished accordingly, including having to register as convicted sex offenders.

But the Obama-era guidance led colleges to steer students away from reporting crimes to the authorities, and required use of the low “preponderance of the evidence” standard of proof when investigating and disciplining students accused of sexual assault.

This led to colleges barring an accused student from reviewing the evidence against him or cross-examining his accuser; refusing to allow an accused to hire an attorney or, when attorneys were permitted, prohibiting them from speaking on the accused’s behalf; and implementing other procedures that fly in the face of the protections typically afforded to someone accused of a crime.

>>> Read more about campus sexual assault, and how to fix the problem.

The guidance letter received criticism from liberal and conservative quarters, from law professors to think tank scholars to members of Congress and many others.

Law professors at the University of Pennsylvania wrote that this “approach exerts improper pressure upon universities to adopt procedures that do not afford fundamental fairness,” and that “due process of law is not window dressing.”

Harvard law professors similarly decried the procedures as “overwhelmingly stacked against the accused” and which were “in no way” required by federal law. It also led to numerous lawsuits filed by students who were punished in these kangaroo courts.

In her speech, DeVos stated, “The notion that a school must diminish due process rights to better serve the ‘victim’ only creates more victims.”

Instead, due process must be “the foundation of any system of justice that seeks a fair outcome. Due process either protects everyone, or it protects no one.”

Sexual assault investigations and adjudications are serious issues that involve complicated procedures designed to get at the truth and prevent further harm to victims and those falsely accused.

Compound this complexity with a massive federal bureaucracy and various interest groups with their own agendas, and it is little wonder that alleged victims, alleged perpetrators, and universities themselves are often left with no clear idea of their rights and responsibilities under the law.

Reversing the ill-advised Obama-era guidance is the first step to ensure that sexual assaults are properly investigated and adjudicated by trained professionals, leaving college administrators, as DeVos said, “to focus on what they do best: educate.”